I just finished up my images covering the cherry blossom bloom of 2013 in Washington DC. It was an intense few days of non-stop photographic action! I woke up 4 days last week at the 4am, shot till 7am, edited till 8:30am and worked the rest of the days. It took a lot but I think it was worth it.

Overall, I thought this year’s bloom was great. The cold stretch we had into March served to delay the bloom, but also I think make it more cohesive as most trees come to their peak near the same times. Last year, trees bloomed a bit more haphazardly, which made it difficult for me to say “THIS is peak bloom”.

While the blooms were really nice, unfortunately the rest of the landscape in Washington, D.C. left something to be desired, photographically. After the earthquake of 2011, the Washington Monument was pretty seriously damaged. In mid-March, contractors begun finally repairing the damage of that day, and started a brace-like scaffold that has built up significantly since then. While I’m all for the Monument getting repaired, I have a hard time understanding why they couldn’t wait ONE MORE MONTH. It has been nearly two years since the quake anyway.

It was hard not to include the Monument in my shots. For one, because I have an affinity for shooting it. I think it’s the most iconic symbol of the city — it’s dramatically set on a short hill with a nice eastern exposure for photography, it’s tall and made of pure marble. Because of it’s literal stature above the city, it also is hard to avoid when shooting on the Tidal Basin. The Jefferson Memorial just isn’t as dramatic a shape from far away as the Monument.

I rolled with the punches though. Perhaps, people will want to look back to when the Monument was under construction? Maybe a future project will include photoshopping it out (I cringe at the thought).

Regardless, I had a blast shooting those few days and think I came away with some decent and unique looks. I appreciate any and all comments, good or bad!

This first one was April 9, when the blossoms first began to burst. You can see a few shy blossoms on the top of the frame. I used an extreme wide angle to create and accentuate the shapes — this sort of wide angle introduced some interesting distortion as well.

Shimmering Above
Peak Cherry Blossoms shimmer in the morning sun on the Tidal Basin before the Washington Monument.

The next morning, April 10, I think the blossoms were at full peak. A gorgeous sunrise burst in front of me that morning. I love when there’s just a few high clouds: they catch the morning color so dramatically. I have been obsessed with ripples on water lately, and used a short shutter speed to snap up their texture, and the shape of the Canadian goose crooked up towards the sky: 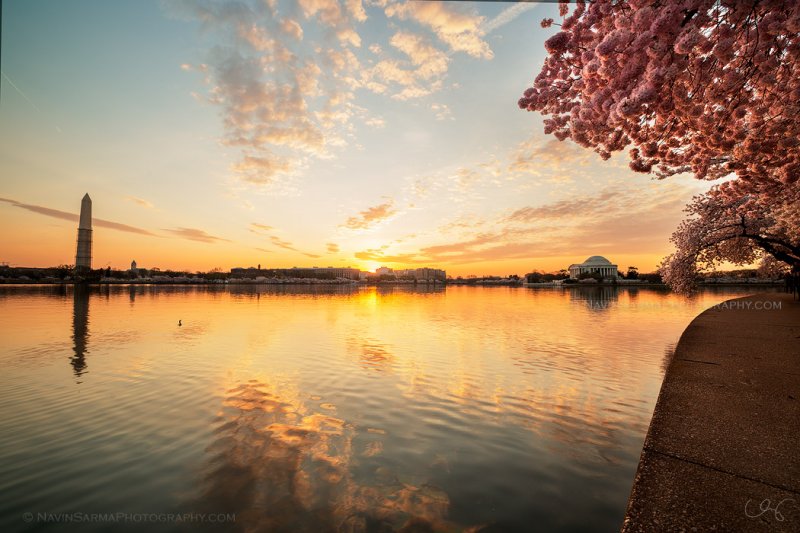 Grand Opening
A radiant sunrise pierces through colorful cherry blossoms at dawn on the Tidal Basin.

I took a day off in between my blossom hunting, to try a spot I like in Virginia. More to come on that shot during my next post.

I had been planning my next image for some time. I really want to get a dramatic capture of the wilting away of the blossoms. It’s a time that not many people photograph since it’s sad, in a way. While I didn’t get the shot I really wanted, I came away with a decent representation.

As Friday came, clouds covered the city. An overnight thunderstorm stripped many of the blossoms of their charm. There were some trees that clung dearly to their remaining flowers as they shook in the wind. The blossoms collected at the edge of the Tidal Basin, and moved interestingly in circles and out of the frame. A beautiful but sad realization that it’s the future of every blossom — unless they can spring new life elsewhere: 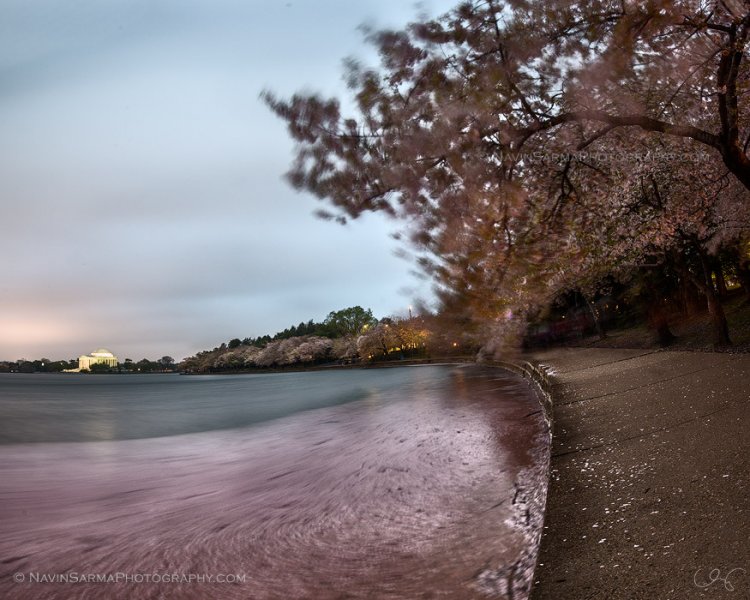 This last shot was a bit experimental for me. I’m not an avid black and white photography type of guy, but the silhouettes of the scene compelled this look. The shaking trees contrasted nicely with the damp look of the sky: 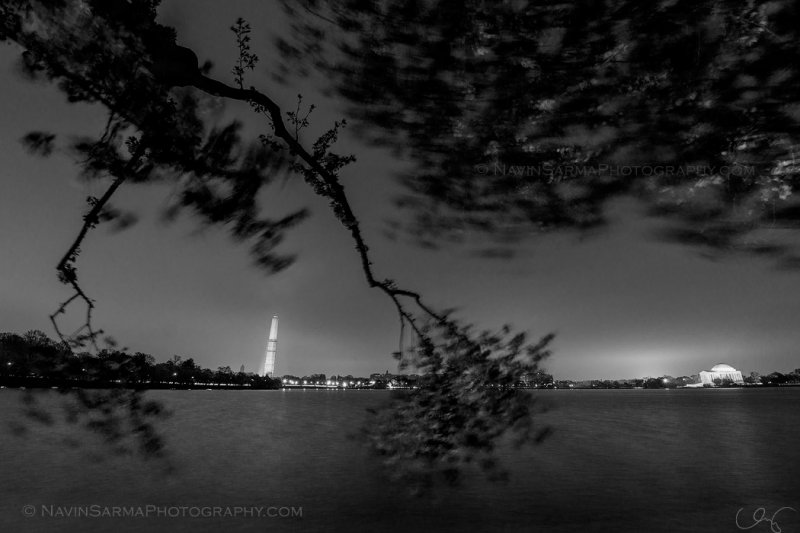 So goes another year of cherry blossoms in Washington, D.C.! I hope you enjoyed these images. Please don’t leave the blog without leaving your thoughts as a comment.