Recently, I was chatting with a friend who is new to photography with an SLR. After shooting an event for the first time, she came away underwhelmed with the images she captured.

We then got into some of the details of why the shots didn’t appear as she had wanted. When she mentioned how frustrated she was at choosing the manual settings (aperture, shutter speed, and ISO), I thought back to my own frustrations when I first started. I, like she, had heard these buzz words but hadn’t quite made the connection of how they would affect my images.

So, I thought I would dedicate this post to give a how-to and introduction, with examples, to the basics of digitial photography with an SLR: aperture, shutter speed, and ISO. Granted, there is a ton of literature out on the internet, but this may help you or anyone you know who’s interested in taking the next step in photography. These are just the very basics, though — there are many more nuances to shooting that I can get into in later posts.

One thing to keep in mind: photography literally means recording of light. Everything you do is related to that. There are elements within your camera and lenses that play the light differently: aperture, shutter speed, and ISO. Each has its own advantages and disadvantages. That said, there is no one combination of the three that will produce the best image; you will adjust each of the three according to the light conditions and your creative vision.

We can start with probably the most complex of the three elements I’ll cover: Aperture. Aperture is the size of the hole of light opened or closed by the lens. Adjusting the aperture either darkens or brightens the image (as you are changing the amount of light that shines on the camera’s sensor at a given moment), and increases or decreases depth of field.

When would you want to increase or decrease the aperture? Generally, you would adjust your aperture to achieve a certain depth of field effect. Let’s say you only want a small plane within the scene in focus, and the rest blurred out (and achieve an effect known as bokeh). You would increase your aperture, by (confusingly) lowering your aperture number (from f/11 to f/2.8, for example). Here’s an example of an image with a large or wide aperture. Using f/2.8 at 100mm, only the snow-capped post is in focus; the lights in the background blurred out: 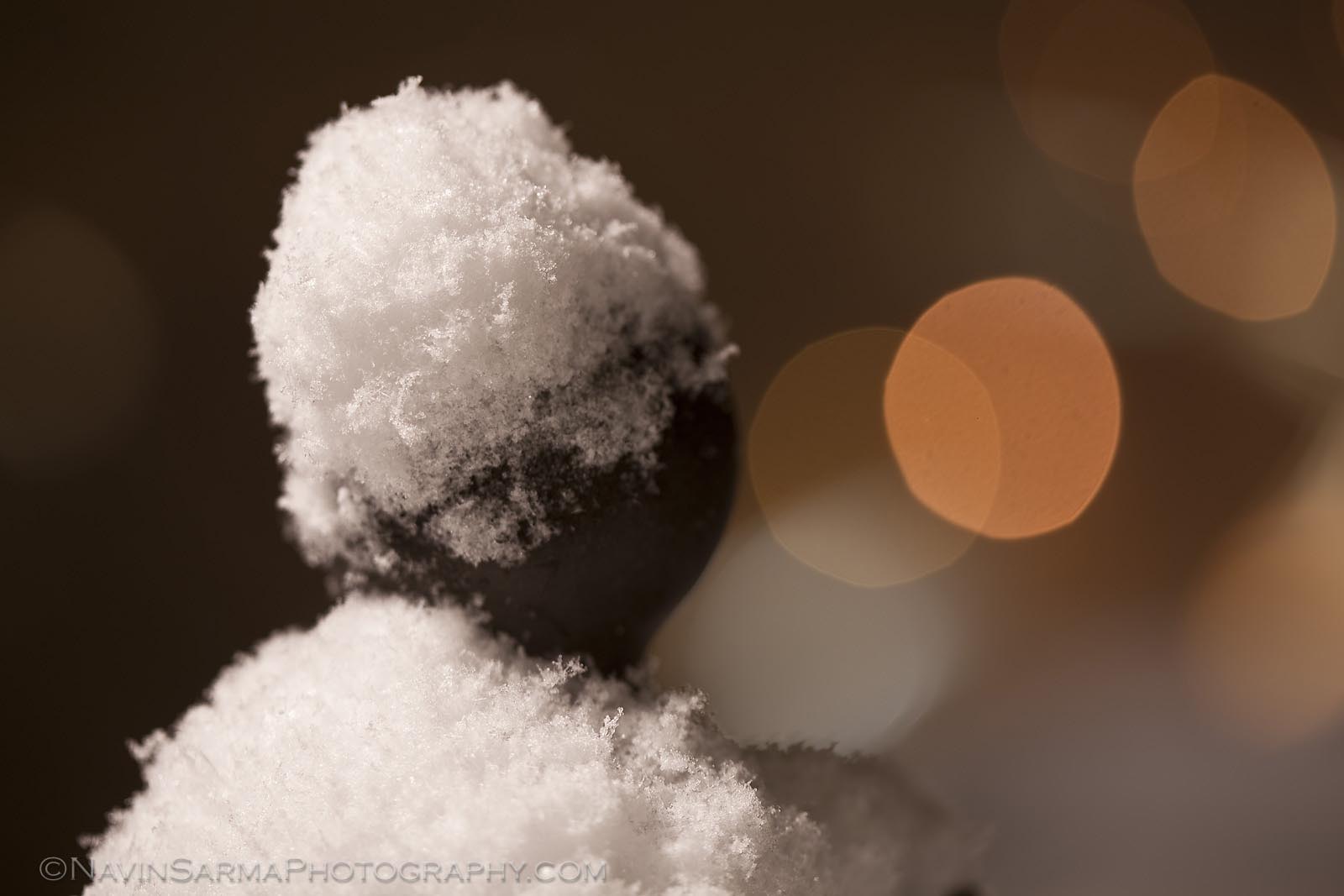 What if you DIDN’T want any of the planes within scene out of focus, say if you were shooting a beach scene or other landscape. You probably guessed it, instead of widening the aperture, you would “stop it down” to a smaller aperture setting. This would mean increasing your aperture number from say f/2.8 to f/11. Here’s an example of an image with a smaller aperture. Using f/22 at 17mm, the rock (close in the foreground), the kids (somewhere in the middle of the plane), and the clouds (in the back of the plane – “infinity”) are all in focus: 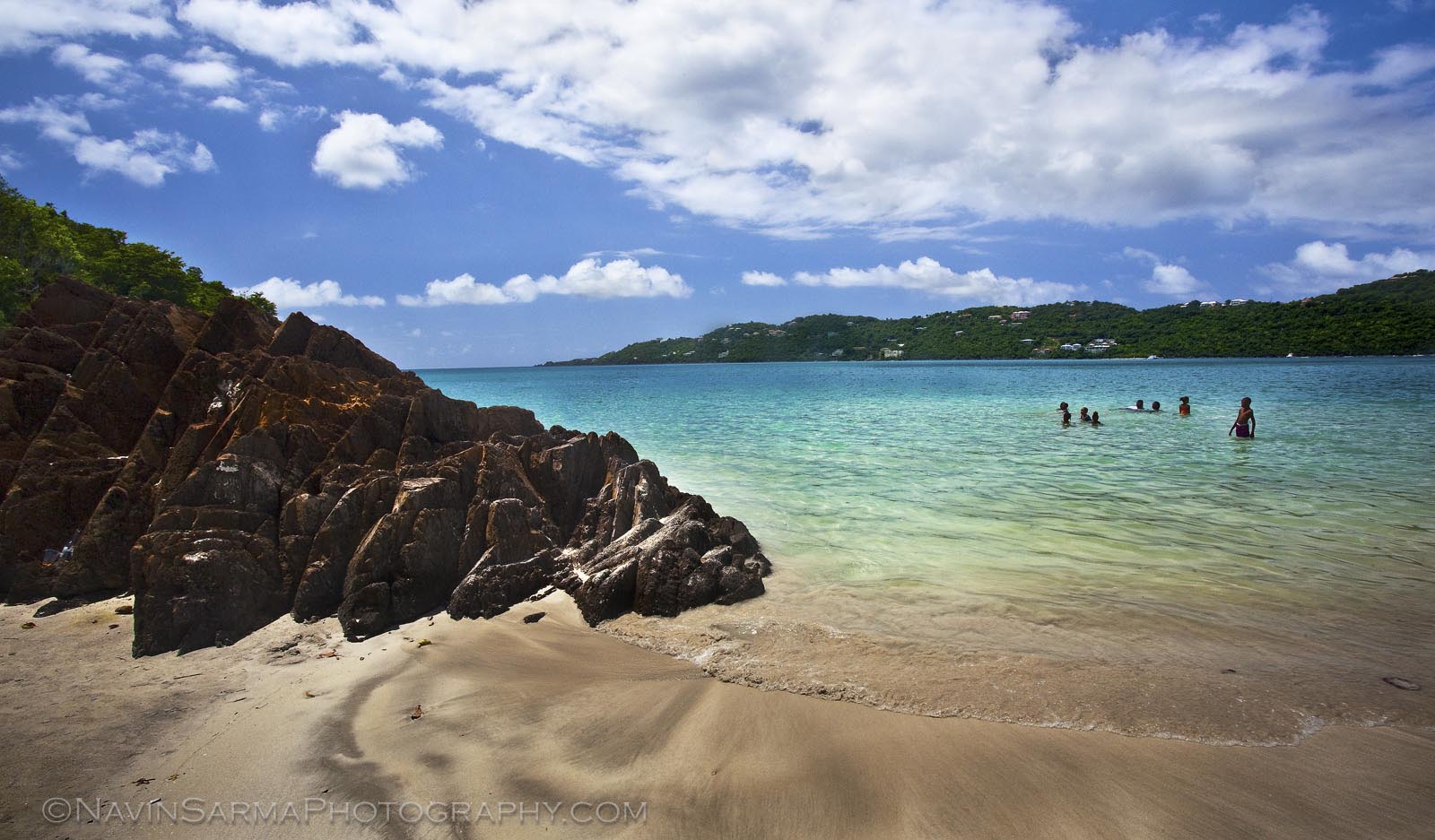 There are other considerations to note when choosing your aperture.

Shutter speed is a relatively simple concept. It is the amount of time the camera’s shutter is open, therefore shining light on the camera’s sensor and recording an image.

Why would you want to increase or decrease your shutter speed? Generally, you’d want to adjust this value to “freeze” or “paint” motion within your picture. If you wanted to capture a single droplet of water splashing up from the ocean, or a bird zooming by a mountain, or another fast moving subject dashing across your frame, you would want to use a fast shutter speed that spans only a fraction of a second. Here’s an example of where I used a fast shutter speed, capturing birds flying by the St. Francis Cathedral in Lima, Peru a shutter speed of 1/1000th of a second: 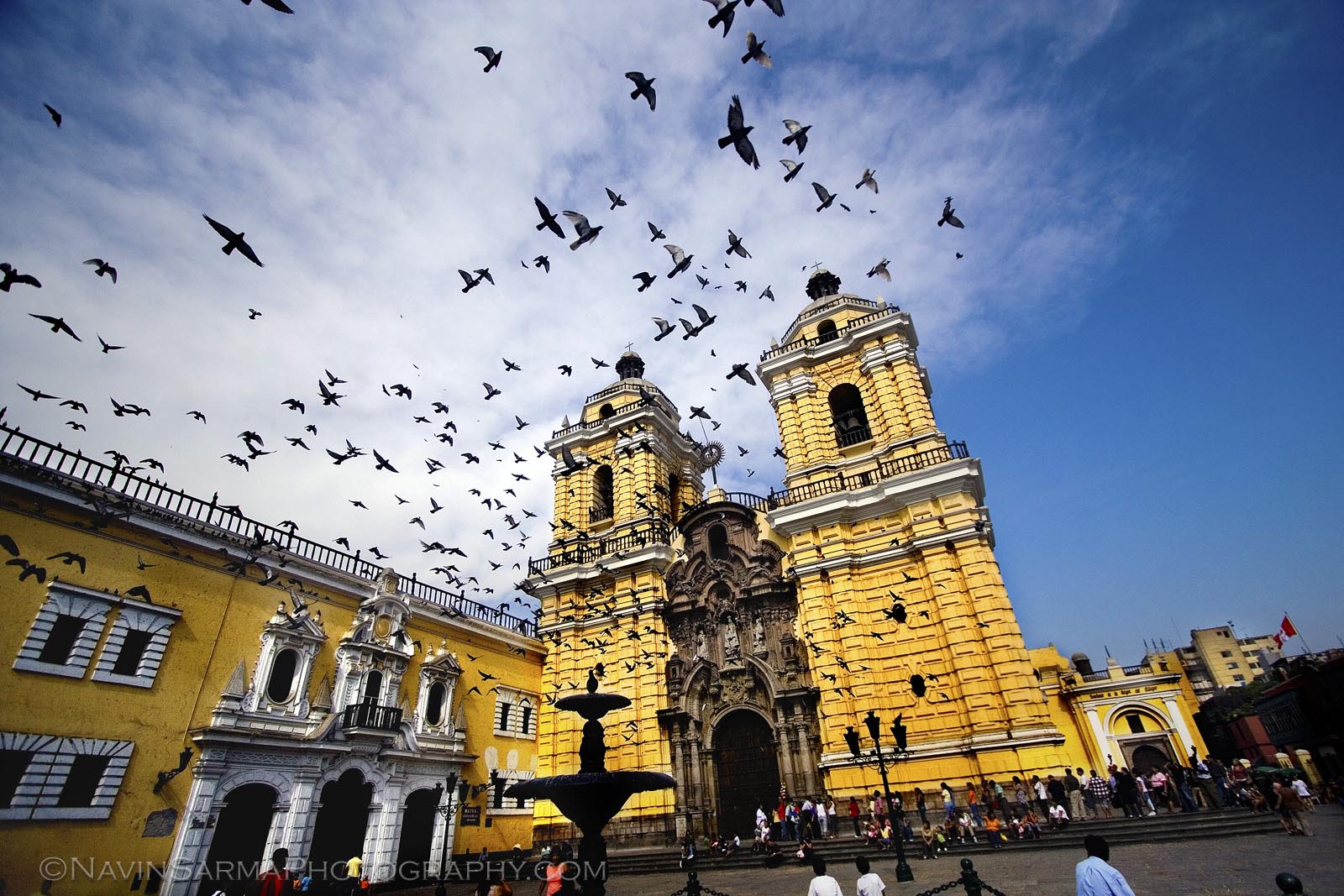 The opposite of freezing motion is to paint or blur it. When you use a slower shutter speed, the camera records movement as it happens across the frame. You can think of it like the many frames that make up a movie — except that instead of a moving image that shows each frame exclusively and in succession, a still image stacks each frame on top of the last. You are, in essence, viewing all the frames of the movie in a single picture.

Why would you ever want to record an image this way? Simple…for artistic effect. A long exposure can streak clouds across the sky, soften reflections in water, and paint people or other living beings. Here’s an example of a shot I took at around 9pm in Georgetown, Washington, DC. I used a shutter speed of 10 seconds (which, for a long exposure, is relatively short) to show cars whizzing by and people walking down the sidewalks: 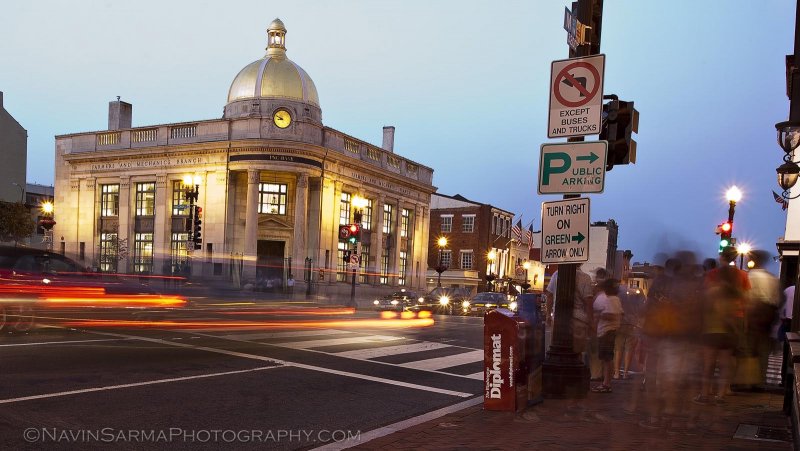 There some things to note when choosing your shutter speed.

Why would you want to increase or decrease your ISO setting? It depends solely on the amount of available light. In all cases, you want to choose the lowest ISO setting as possible. This will ensure that your image is free of grain and as sharp as possible. If your desired aperture and shutter speed settings, coupled with your lowest ISO, do not produce a bright enough image with enough detail, you tick up your ISO as appropriate. At some point, too high of an ISO setting will produce more grain than is acceptable; that threshold is dictated by your camera body (and its image sensor size) and not your lenses.

Of course, there are other things to keep in mind when choosing your ISO.

Here’s an example of an image I had to take at a high ISO. This picture is a “macro” (meaning close up) of a very small flower (about the size of a dime) in slightly larger petals. In order to freeze the motion of this incredibly small flower which was flapping all over the frame from the wind, AND get enough depth of field to have it acceptably in focus, I had to choose a shutter speed of 1/800th of a second and a depth of field of f/6.3. Any slower of a shutter speed and the flower would have unintended motion blur; any wider of an aperture and the flower would not be acceptably in focus. Actually, the depth of field was so tricky on this subject that I had to “focus stack”, meaning take several pictures at different focuses and blend them, to get this image truly acceptably in focus. The only option I had to pull in enough light to make the image bright enough, given my strict parameters for shutter speed and depth of field, was to increase my ISO to 4000. This ended up working out great, though you can see some grain in the darker parts of the image: 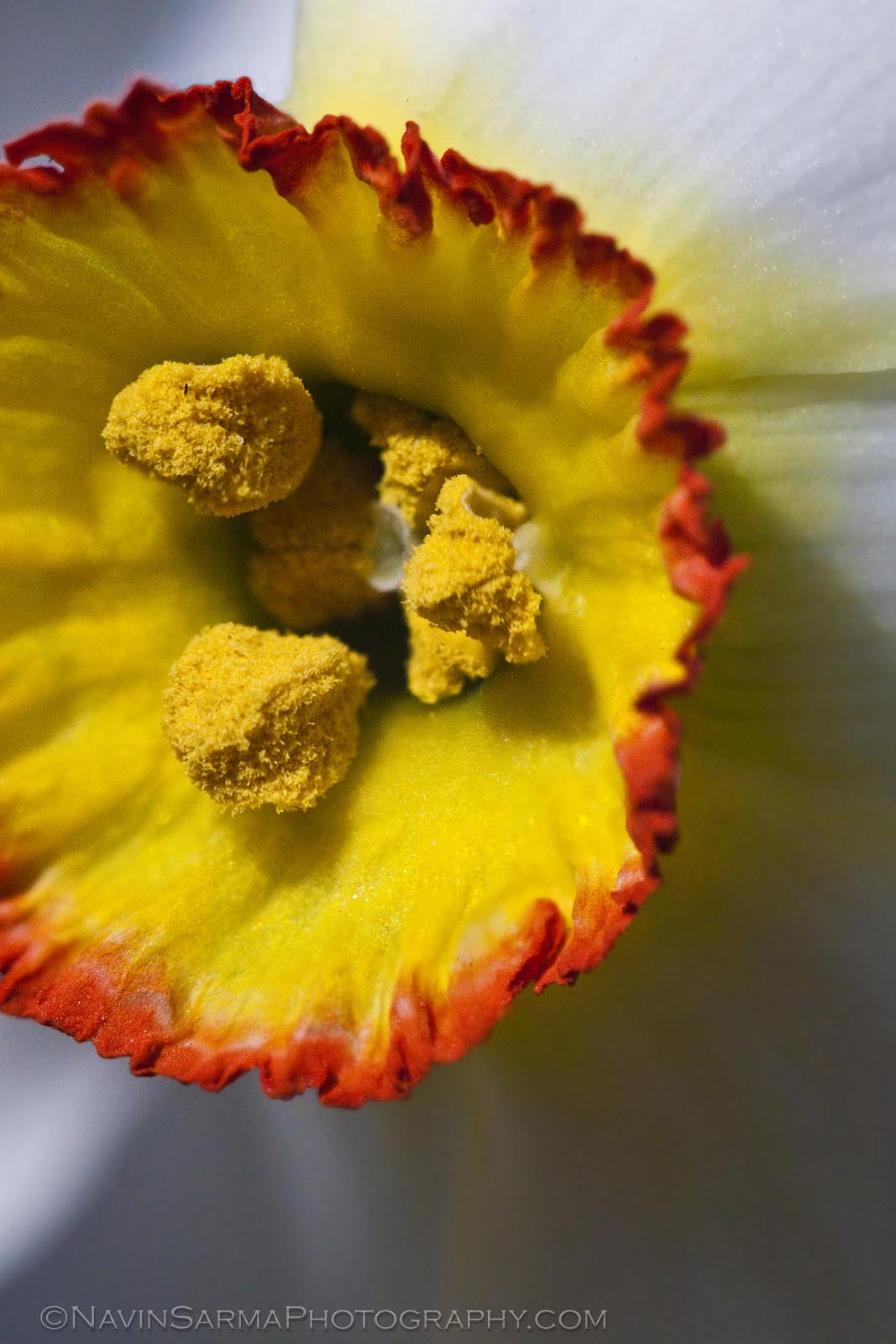 Well, there you have it. I hope you feel like this was an informative post that helps to clarify some of the mysteries when starting out in photography. As you have probably noticed, the moral of the story is there is no one “golden” setting to always use when taking pictures. You have to balance your creative juices with available lighting conditions. There is obviously much more to this story, including planning for the best light, using sources of artificial light, and using processing techniques. The rabbit hole of things to learn about photography winds far down a path, but I guess that’s why photography has gripped the attention of so many people across the world. Now, perhaps you can understand why many people argue that quality photography is not all in money spent on lenses and cameras.

One thought on “Photography 101: Aperture, Shutter Speed, and ISO”