Following up on Part 1 from my trip to the Eastern Sierras, my next destination was the White Mountains.

The White Mountains are a few miles away from Bishop, California. A desert mountain, the area looks like a gray, barren wasteland, with occasional shrubs and nearly no wildlife except for beetles, marmots, and small birds. And… Bristlecone Pine trees: beautiful, gnarly, and old trees rising up from the gray ash. These trees are some of the oldest beings on earth (some being nearly 5,000 years old) and after their death, still stand erect for many years. Standing tall on the White Mountains at 11,000 feet and away from most city light, these trees are witnesses to spectacularly clear, starry night skies. For all these reasons, I traveled up into the White Mountains.

Upon first arriving to the Eastern Sierras, I noticed the drab looking, gray and brown mountains and cliffs. As I ascended up the White Mountains, those grays and browns turned brighter colors: light grays, reds, and white (hence the name of the mountains). At the same time, as I climbed elevation, the air got thinner abd the mid-day blue sky turned deeper and deeper blue. The deep blue sky against the brightly colored, rolling peaks of the White Mountains almost made me feel like I was underwater, though I was the exact opposite of that: 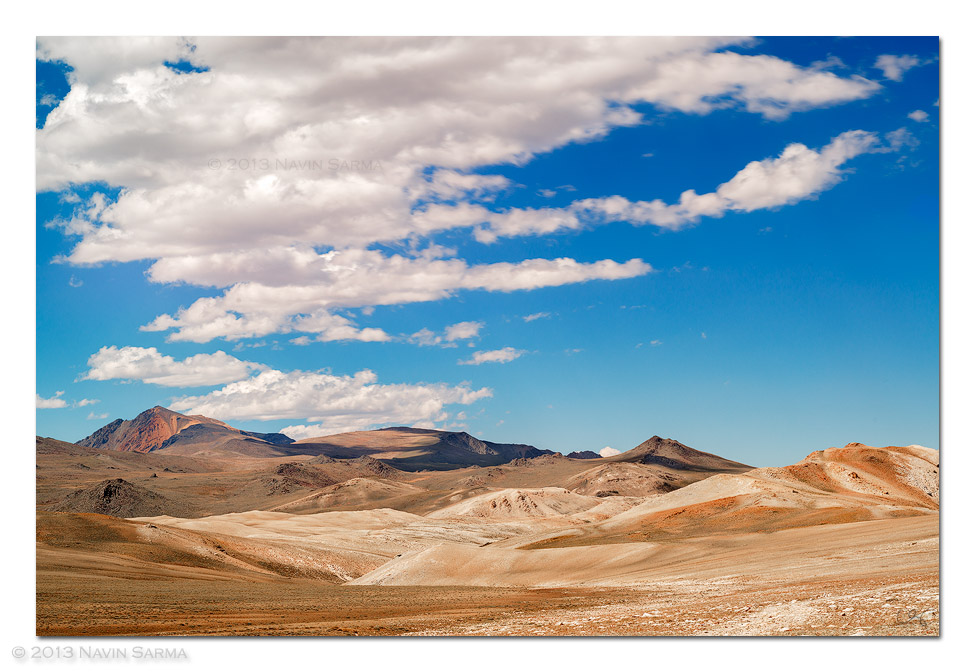 As I continued up towards Schulman and Patriarch Groves, home of the bristlecones, I began noticing some short yellow shrub-like flowers just barely rising from the gray dirt. Tiny marmots darted back and forth in the road ahead of me, hiding in these shrubs and their homes as they searched for whatever little food existed in the landscape. I stopped in an area that I felt encompassed the daytime character of the White Mountains, with a few yellow shrubs scattered in the foreground, a deep blue sky with puffy white clouds above, and bristlecones hanging on to their existence in the white hills in the distance: 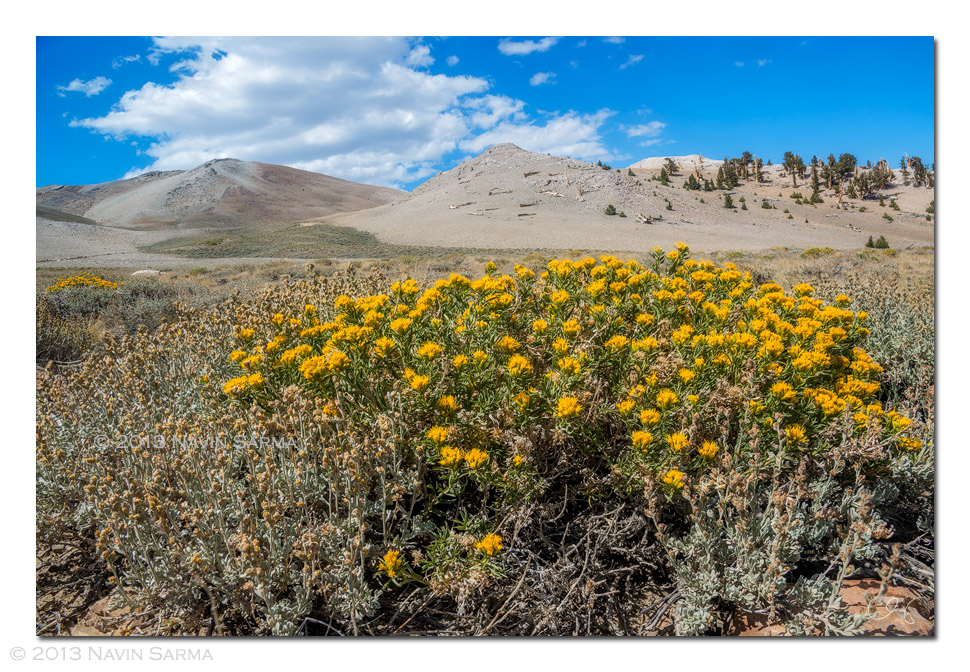 When I arrived closer to the Bristlecone trees, it was still daytime. I took this time to scout the trees and determine the best location for sunset and twilight. As the sun continued to bear down on the landscape, I noticed the stark shadow cast by one of the twisted, dead trees and positioned it to streak across the frame. I used a small aperture to accentuate the light of the sun to create a “sunburst” or “sunstar” effect and a black and white rendition to enhance the stark mood of the scene: 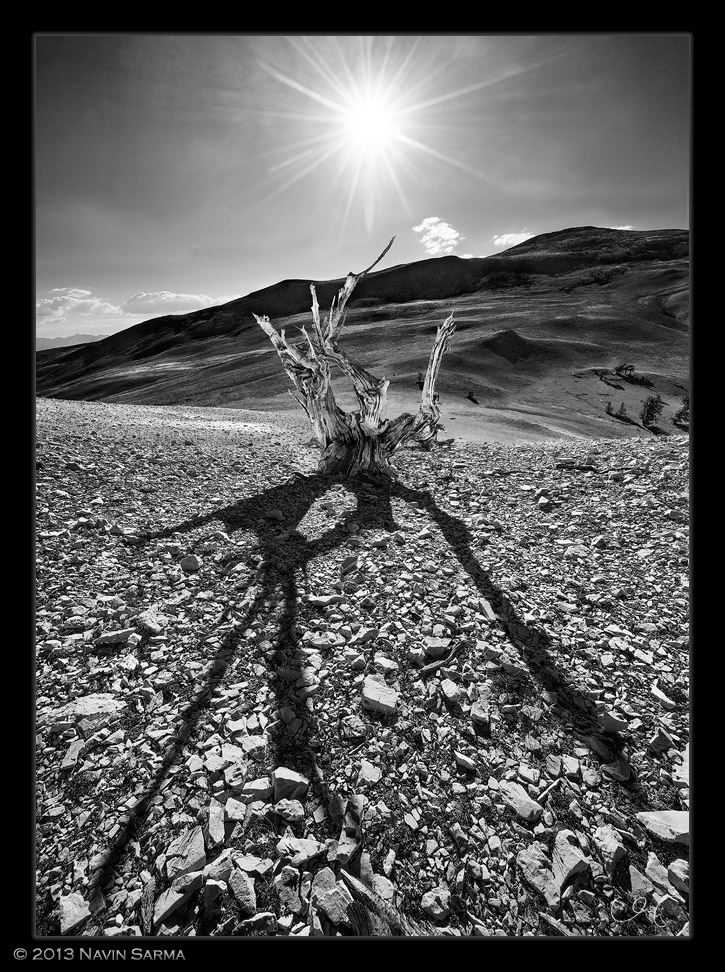 Sweet Desolation
An ancient Bristlecone pine tree stands tall and alone upon the barren, granite rubble of the White Mountains Wilderness.
Nikon D800, Nikon 14-24, f/20, ISO 100; two exposures for dynamic range (HDR) (one exposure with my finger on the sun to reduce flare)

After my first night at Mono Lake and some research, I determined that the milky way should appear to the south/southwest of the location I was shooting. So, I continued scouting compositions pointed that way. Milky way shots are especially common from the White Mountains area for the reasons I stated above (dark skies and high elevation); however, I wanted to try something slightly different than the time-lapse, one tree compositions I had seen. Being drawn by the barren quality of the granite rubble and the rough life of the Bristlecones just hanging on the side of the mountains, I decided on my composition just after sunset. I used soft, twilight rays to illuminate the foreground and continued to wait until the first stars showed. Soon, I could see the milky way with my own eyes — a large orange band going across the entire sky. With the use of today’s camera technology, the camera pulled out much more detail than my eyes could ever see, but helped create an unforgettable image for me: 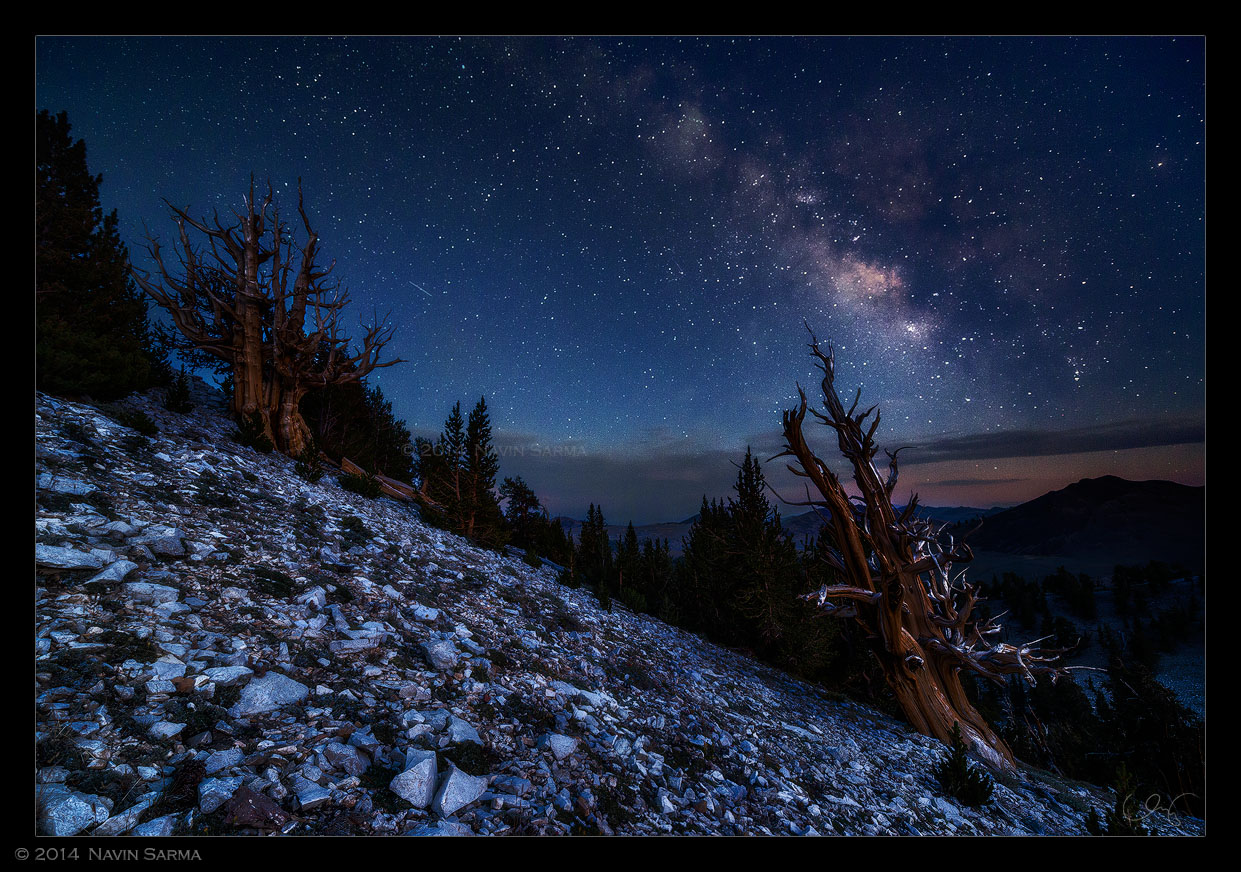 Just a few more images left from my trip to the Eastern Sierras. Stay tuned…

One thought on “The Eastern Sierras, Part 2: The White Mountains”