In early August, I traveled out west for a good friend’s wedding in San Diego. Given I am rarely on the west coast, I took this trip as an opportunity to explore a region of our country that I hadn’t previously.

My first thought was to search for any interesting locations within driving distance of San Diego. But I quickly learned that any such location (like Death Valley) would be some 110 degrees fahrenheit during early August. Broadening the range a bit, I decided on a short flight out to Reno, Nevada and a drive just south from there to visit a higher elevation and cooler part of California: the Eastern Sierra Mountains. Over the course of the next three posts, I’ll cover my trip from the major locations I visited around the Sierras: Mono Lake, the White Mountains, and Lake Tahoe.

Though I’m not a scientist, I love to learn about how beautiful parts of the Earth are as they are. I stand in awe of a natural site, thinking about the long history of violence, happenstance, change, and silence… and soothing questions come to my mind. How could this possibly get here? How could it be so beautiful? What came before it, and what’s next? What else is out there, in the world and the Universe? Why do I even find this beautiful, isn’t it just water, rock, and air? Is this beauty the mark of God?

These questions make me research each place I’ve ever photographed or ever will. Each answer is one step closer to the truth. So here goes my semi-informed summary of what I found intriguing about the Sierras and surrounding region.

The Sierra Mountains, like most other dramatically beautiful natural sites in the world, are a product of continuous tectonic forces. As the giant plates of the Earth smashed together on one end and sank at another, a plume of granite rock formed just below the surface and pushed upwards. The rock pushed through an ancient sea, displacing the ocean and revealing the hardened sediments that were accumulated within the water. As the mountains continued to push upwards, wind and rain eroded most of the ocean sedimentary rock, leaving the characteristically gray mountains that populate the Sierra region. Glacial events served to cut the granite rock into interesting shapes, as best illustrated perhaps by Yosemite Valley’s Half Dome.

While volcanic activity continued in the Sierras, it also created the White Mountains and other ranges just to the east, and with other geologic changes caused the relatively recessed area to form the Owens Valley and Mono Basin. In the basin formed the saltwater, terminal Mono Lake, which held the runoff from the nearby mountain water and developed salinity as salty minerals continue to be deposited but never dumped. There Mono Lake has stood for nearly a million years, before recent human activity revealed it’s hidden beauty.

In the mid 20th century, tributaries to Mono Lake were redirected to feed Los Angeles’ waters system. As the supply to the lake dwindled, so did the lake’s depth. With that, marvelous limestone formations, created when volcanic hot springs interact with the salty Mono Lake, were revealed. These fantastic tufa formations line the edges of Mono Lake, are iconic of the area, and were a big reason for my trip to the Eastern Sierras. It’s an irony that human meddling with nature results in humans marveling at a natural occurrence. Fortunately, California has set a goal of restoring the lake’s original depth within the next 20 or so years, which will result in water again covering these rocks. Until then, we can appreciate the tufas revealed at Mono Lake.

On to the trip itself. I flew into Reno on Sunday afternoon, following my friend’s wedding. Shaking off the hangover from a long couple of nights, I got off the plane in the late afternoon and headed South to try to arrive to Mono Lake by sunset. 140 miles and more than 2.5 hours later, I finally arrived. While I normally like to have a composition in mind about an hour before sunset, I was only getting out of my car about 15 minutes before it! I was in a rush, and did what I could. 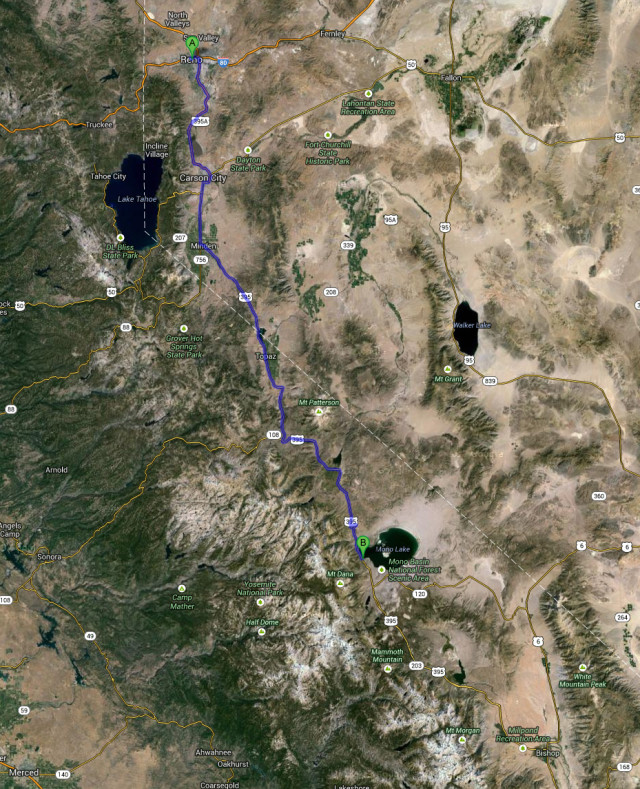 I headed straight for South Tufa, an area with a particularly interesting set of tufa formations. I parked my car as close as I could, then started hiking through rabbitbrush towards the shore.

Looking out into the distance to the lake, it seemed like an easy enough hike over the brush. I quickly realized it was not. The rabbitbrush grew larger, wider, and seemingly stronger the closer I got to the water. At one point I was literally stuck in between two bushes when I decided to take another way. While moving back through the brush away from the shore, I noticed two things: a pugent, but sweet smell from the rabbitbrush and a colorful sunset just above them and the nearby ridgeline. The yellow tips of brush highlighted the last streams of sunlight and the dead brush contrasted with its shape and cooler color: 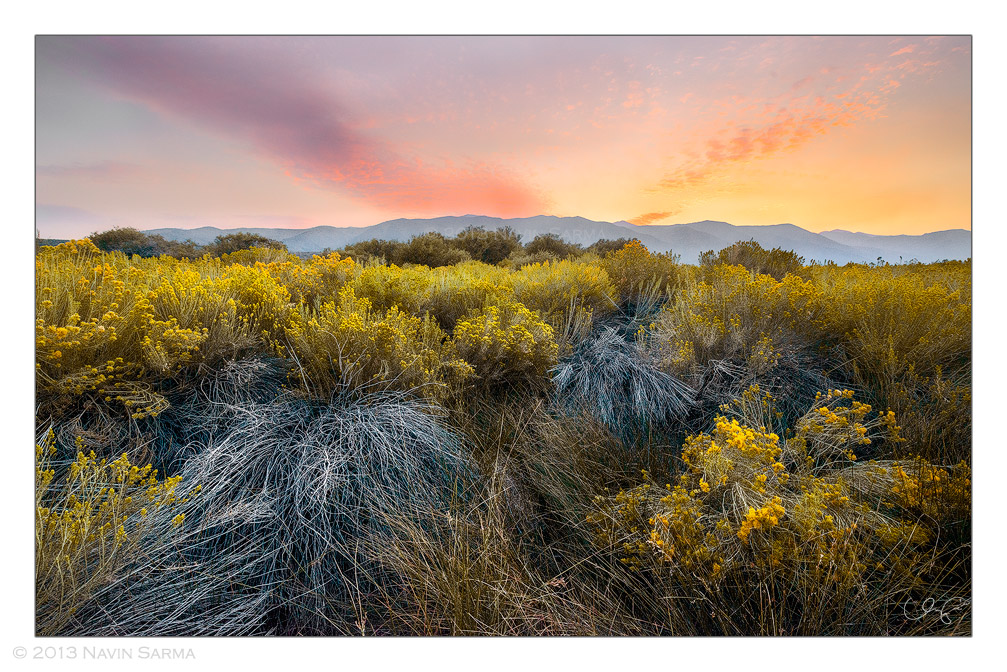 As the light faded into twilight, I finally found my way to the lake shore. In many cases, I’m done photographing after twilight. But another reason I decided on visiting the Eastern Sierras was the opportunities for night time photography. Being 8000 feet in the air during the late summer months, I was hoping to catch some starlight and milky way shots that are near impossible near Washington, D.C.

After a couple of test shots, I found an amazing view right into our own galaxy. Smoke from the just blazed Rim fire added some haze and color in the sky. I framed the milky way to race across the frame as the tufa towers zig zagged around it. 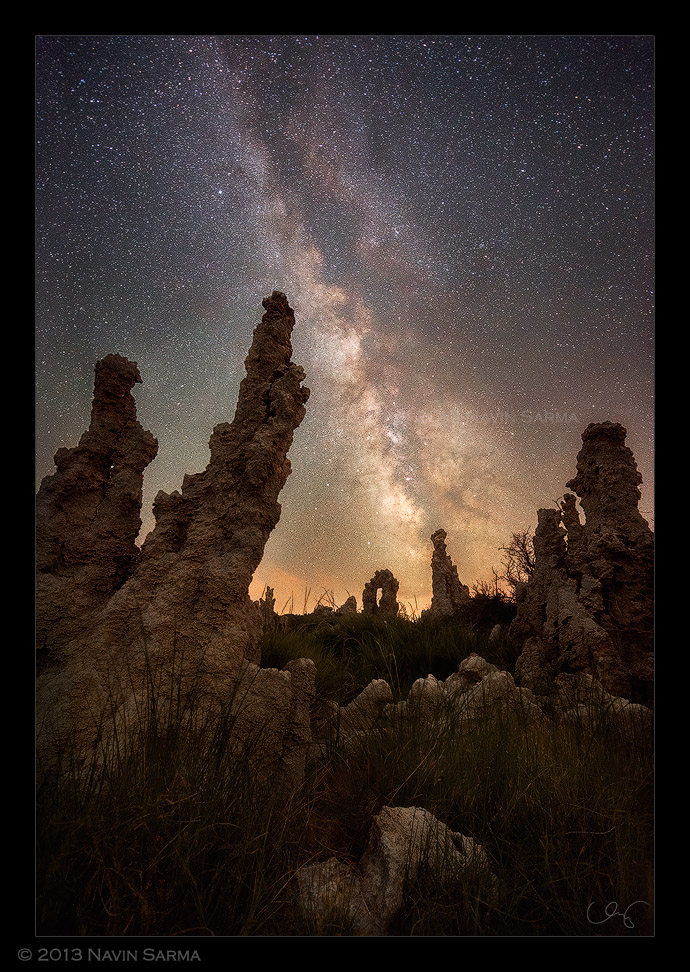 Beneath the Darkness
Smoke from a nearby wildfire scatters distant light from the sun and stars over Mono Lake, California.
Nikon D800, Nikon 14-24, 3 images for dynamic range and focus at f/2.8: 2 for the foreground at 4min, ISO 1600, 1 for the stars at 22sec, ISO 6400; HDR using photoshop layer blending and refined by hand

The next morning, I headed back down to South Tufa to catch the sunrise. As I started got down to shore, I noticed really clean and easy walkway leading back up to near where I parked. In the darkness, I couldn’t find this access point and instead struggled in the rabbitbrush! Oh well, guess it was worth it for the experience of bushwhacking — I guess it’s what the natives did back in the day when they wanted to visit the Lake.

An iconic location, I pretty much resigned to the fact that I wasn’t going to capture anything too unique out of that morning’s shoot at Mono Lake. I know many photographers who have shot there and everywhere in the dramatically beautiful west of the USA, but I did not expect to see the 6 professionalish photographers lurking around the tufas that morning.

Regardless, the sheer size and span of the tufas across Navy Beach was an impressive sight. I used a panorama at a semi-wide angle to capture it all, but not allow the wide angle distortion to miniaturize the tufas in the water. All said, this image is 150 megapixels — a size that could easily be printed as a mural:

As the sun continued to rise over Mono Lake, I was captivated by another tufa formation away from shore. As the sun shined warmth on the tufa and the rabbitbrush beneath it, the scene was iconic of the landscape of the area: 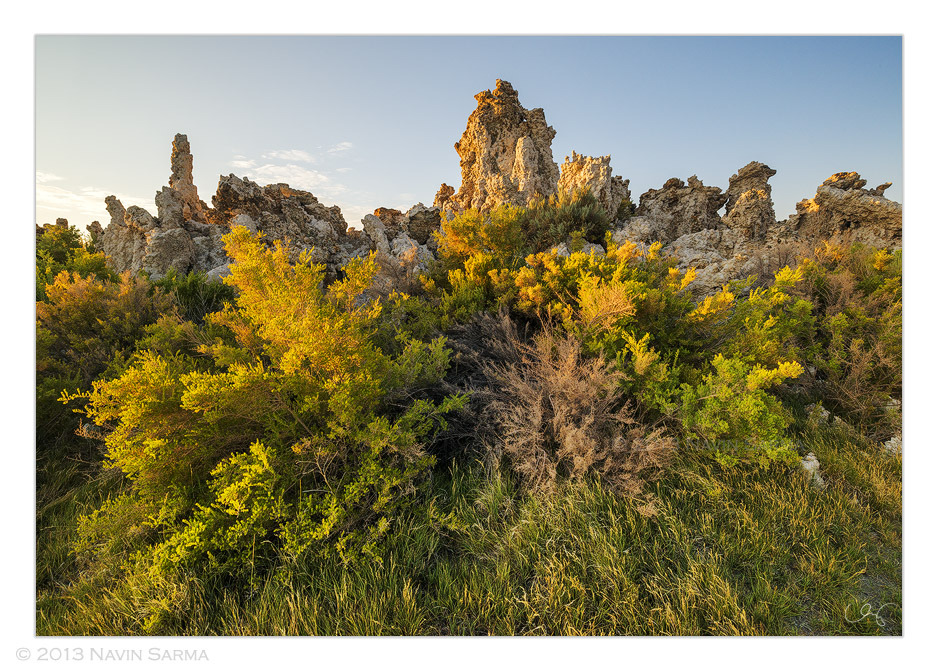 I hope you enjoyed Part 1 of my series from the Eastern Sierras. Next up, White Mountains (and some more starlight photography).