Yesterday, I went scouting at the U.S. Capitol for some shots I plan to take this spring.

I was looking for some blooming flowers and after a while of searching, found none. One of the fundamentals of successful photography (in my opinion and that I teach during my workshops), is to come with a plan, but be flexible.

Since I didn’t find the flowers I was looking for, I shifted to plan B. Upon arrival on the scene, I could see some pretty intense cloud formations brewing above me. The forecast was for a cold front and showers for later in the evening, so I knew there was a possibility of some texture in the clouds. I decided to shift gears and try to get some dramatic looks of the U.S. Capitol with these clouds looming above.

I observed clouds collecting and moving feircely just to the left of the U.S. Capitol. As the building is rather symmetrical, I I decided on a center composition and got into place. The clouds were racing across the sky, and I decided to use a longer shutter speed to accentuate their motion while retaining their texture (too long of shutter speed and the clouds would look milky smooth, without texture): 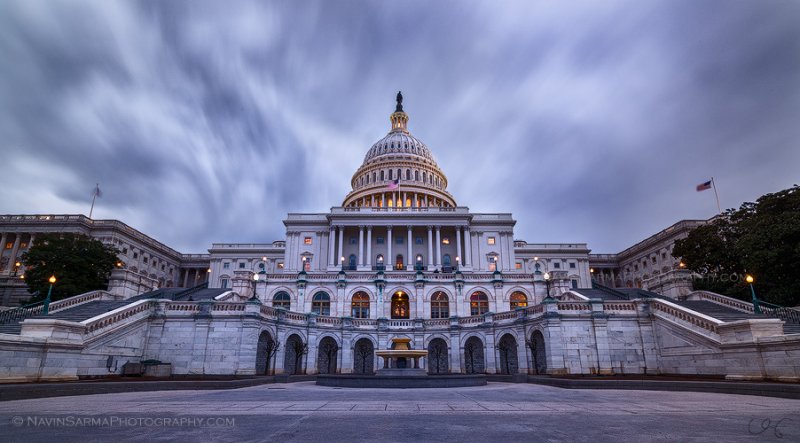 Almost like clockwork, after sunset the city lights of Washington, D.C. turn any low clouds into a stark pink color before orange later in the evening. I waited for after the sun had set for this color to take hold, and take hold it did. I also observed the moon peeking through the clouds: still be visible to the Eastern horizon as it continued its ascent. I waited for a gap in clouds to emphasize the moon against the deep blue sky, and used a wide angle to show the scene over the U.S. Capitol building: 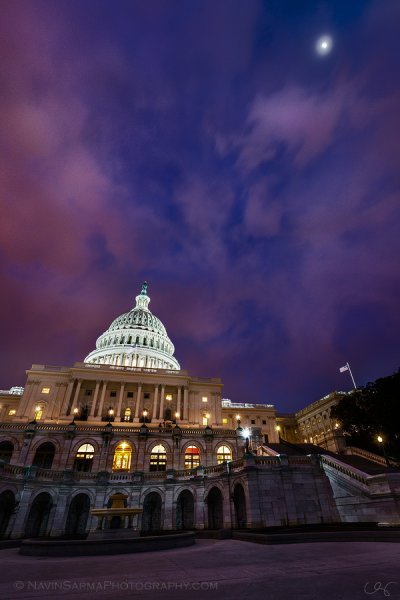 The moon rises through pink clouds, illuminated by the setting sun and city lights of Washington, D.C.

While I didn’t achieve my objective in scouting the U.S. Capitol grounds for blooming flowers, I did come away with some images I enjoyed, and even more, some ideas for next time’s outing.