This past Monday, on Martin Luther King Day, I set out for a quick trip to West Virginia to hike in the snow and capture some winter landscapes. In DC, we intermittently experience snow, but the further west and higher in elevation you go, the weather changes. On average, 160 inches of snow falls each winter… significantly more than in the city.

As I headed west, indeed the road conditions changed as I approached Canaan Valley. Where we had completely clear roads, the roads became significantly more treacherous as I continued. Another notable encounter, on a side note, was seeing the industry side of West Virginia. From the Lindy Point lookout and from several spots east of Canaan Valley, you can see massive wind turbines that help to power the state. I did pass these on my way further west. I also encountered a huge, billowing hydroelectric plant upon a huge manmade resesvior. I’ll reserve any judgements about the disadvantages because of my general ignorance on this situation but will say that these were large blemishes on what otherwise is a place of incredible natural beauty. 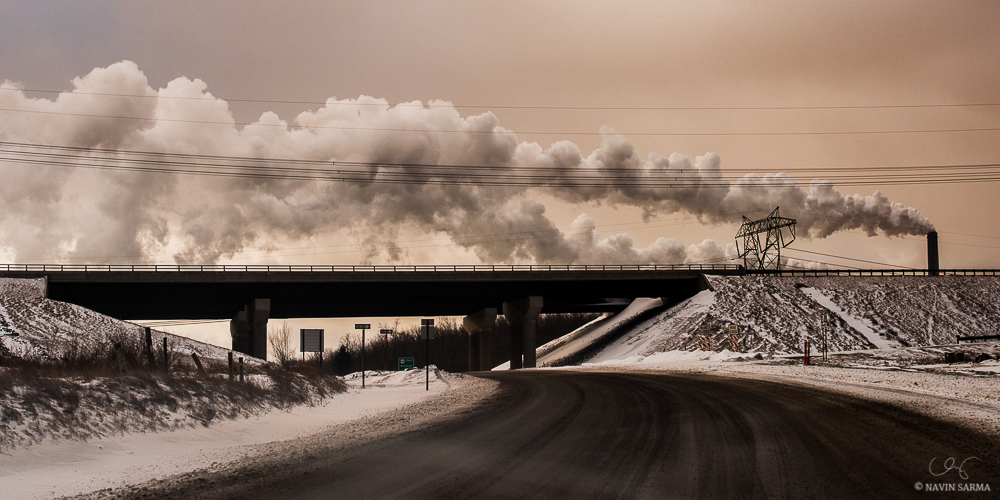 Pollution in Canaan Valley from a Hydroelectric Plant

I intended to go up to Dolly Sods for sunrise as snow was mounting there and there was the potential for fog and frost, all amazing conditions for the photography I sought. I meandered up the road to Dolly Sods, which at 3000 feet was a continuous climb in altitude. As the altitude changed, snow continued to pile and soon I found myself driving through a foot of fresh snow from the couple of inches from just a mile away. The snow continued to fall through gray and windy skies, adding to the mood but also to a little nervousness as my 4WD maintained control, but barely so. I came upon the final stretch of road about 3.5 miles from Dolly Sods and found that it was closed for the winter! While some folks had parked right there and hiked up, I simply did not have the time or prep to hike 3.5 miles each way in a foot of snow. So, I had to go to plan B.

Plan B was Elakala Falls and Lindy Point, two places I have been to several times before but in different conditions.

With snow freshly fallen from the night before, the Elekala trail was completely untouched by anyone that morning, and I set out through the snow for a short hike to the first set of falls. 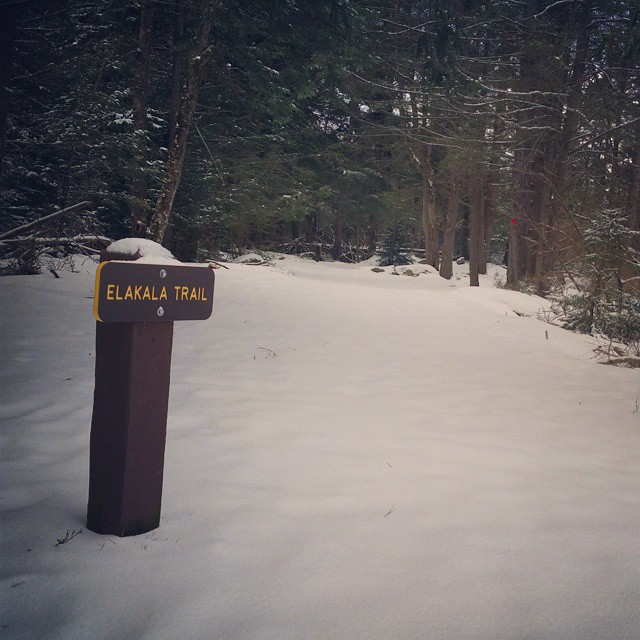 Elakala Trail in the Winter

I came to the frozen over falls and scrambled down the gorge, grabbing trees as support as I descended. While I had taken many shots of the falls straight on, I decided to try a different vantage point from the edge of the wall of rock. This allowed me to use the interesting shapes created in the water to some advantage. 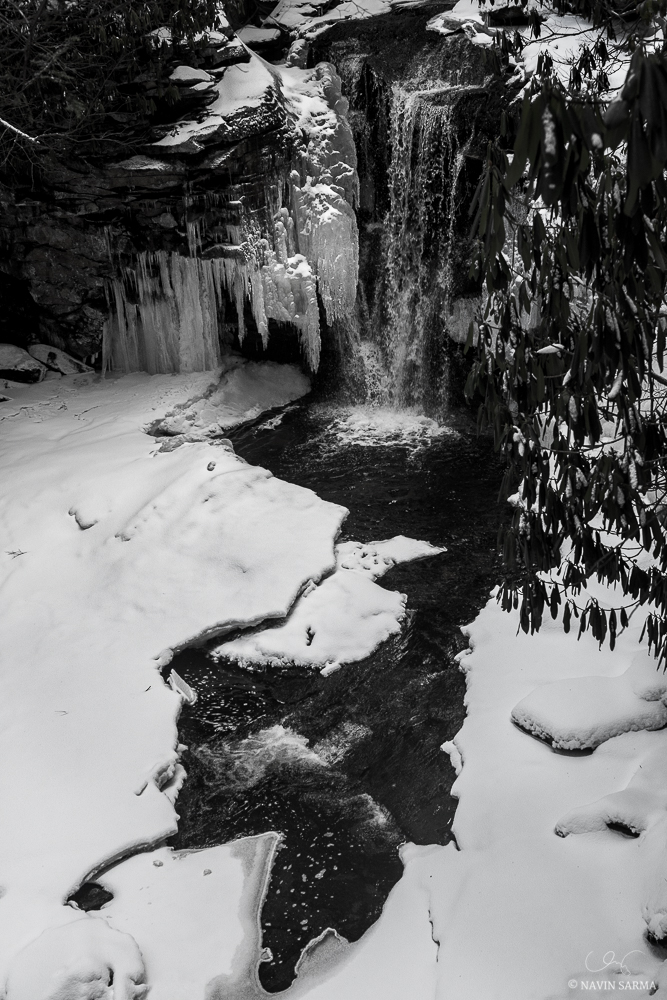 Pockets of water through the ice and snow form interesting shapes at the base of Elekala Falls, Shays Run #1

I spent much of my time reflecting on the scene rather than trying to photograph it. If images came naturally, I began to shoot. I found myself only shooting abstract from this moment on. It was a fun exercise, and while perhaps not completely productive, helpful to restore my psyche.

I approached the water and was enamored by shapes created by the gaps in ice and the light reflected, as shown by these two images: 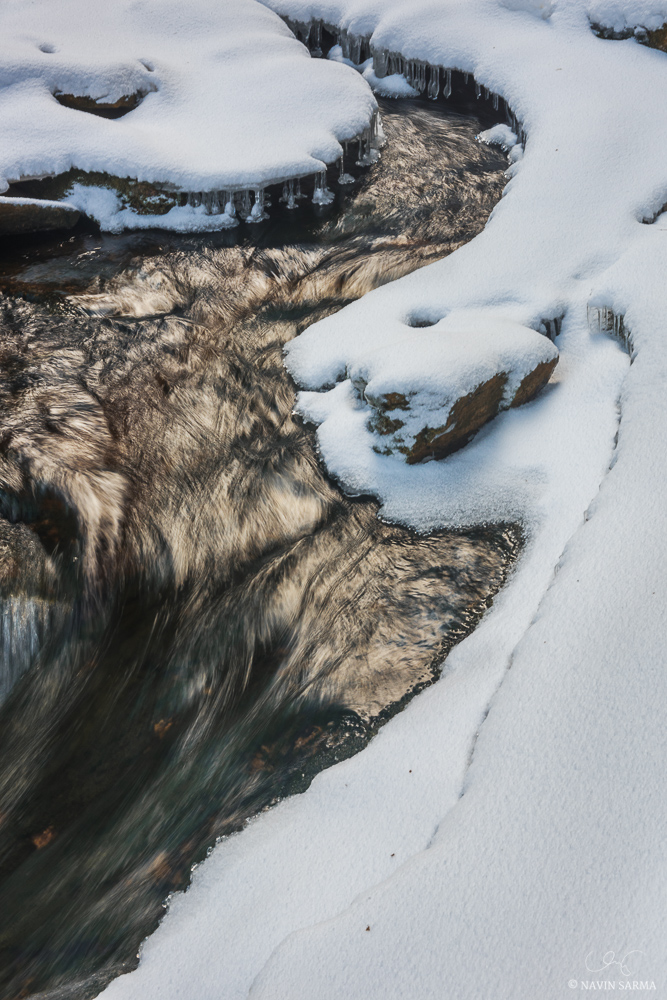 Reflections of early warm light in the water of Elekala Falls 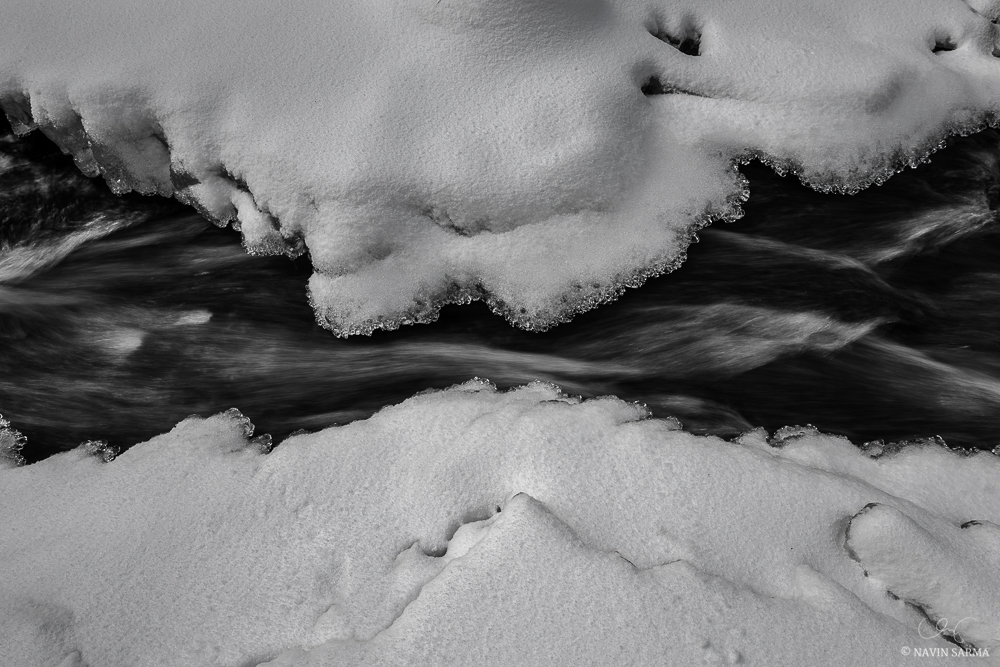 After this I continued out to Lindy Point. As was with Dolly Sods, the road was closed from about a mile from the Lindy Trail. This meant about a 3 mile hike, roundtrip, to get to Lindy Point. This was something I was more prepared for than up in Dolly Sods! I set out on the trail and noticed ski tracks in the snow, then the frequent passing by of cross country skiiers rather than hikers. Seems that out here, in the winter, people are used to exploring the landscape on cross country skis than just their feet! 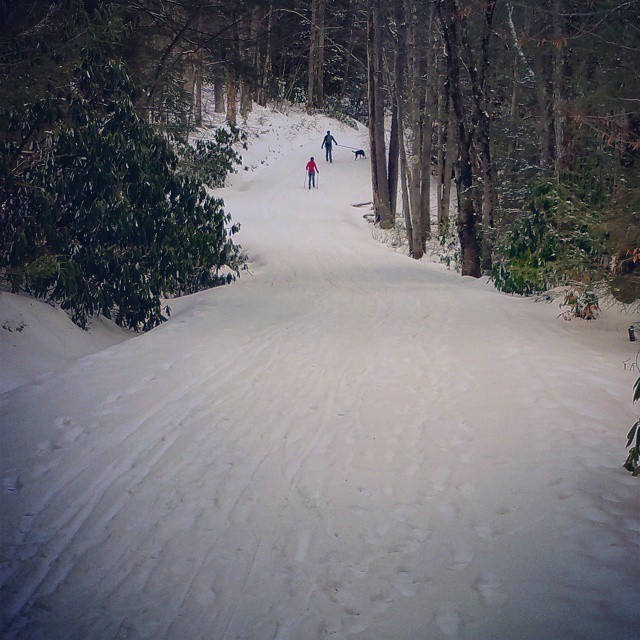 As I observed the snow nearly everywhere, I often had to do a double-take as it looked like people threw small styrofoam pebbles into the snow! But in fact, the snow was so light and airy, it had this illusion. The snow was so light that the snow that covered roads on my way in on the cold morning evaporated (rather than melted) before I passed by on my way home. 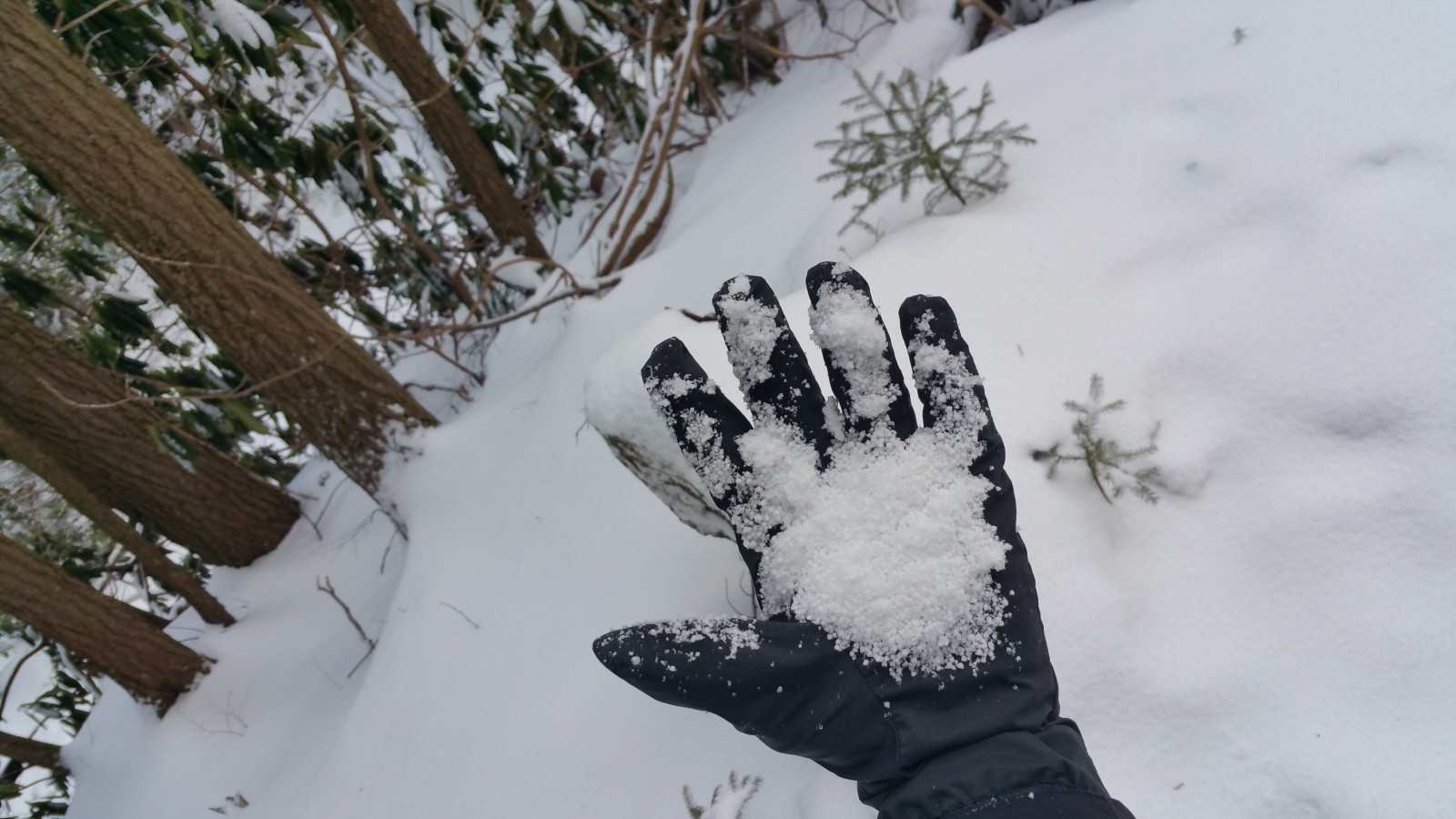 Upon reaching Lindy Point, all of the compositions I have done or were used to seeing didn’t seem appealing at all. Instead, I waited for the light as the sun peaked through pockets of clouds and basked the hillside. As the noonish sun interacted with the bare trees, it created interesting, nearly perpendicular shapes in contrast to the straight trees. This shot feels very abstract from far away, but as you approach it closer you can come closer to reality. This last shot is probably my favorite of my short trip: 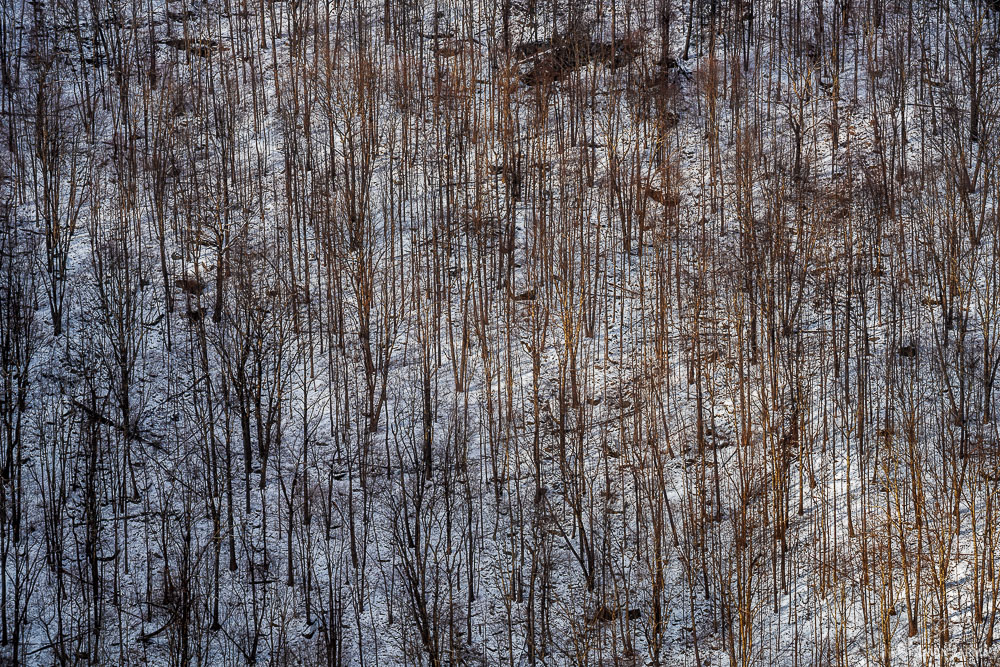 As I mentioned, while this trip was not very productive for my portfolio, it was exactly what I needed. Despite being a city/suburban guy for my entire life, never really hiking or camping throughout my youth, something about experiencing the natural landscape is so rejuvenating to me. It was worth it to spend some quiet time to myself, observing the environment, feeling the rocks and trees in my hands, and listening to the sound of soft snowfall, the distant roar of the Blackwater river, and woodpeckers in the forest.

Maybe my appreciation is based in generations of instinct as my ancestors invariably had closer interactions with their wild surroundings. This history we have with nature makes the landscape to me so incredibly human, moreso than people readily realize. I feel that many people I know in the city, normal people or even photographers, place so much emphasis on the trials and tribulations of people interacting with each other versus how we interact with the environment and therefore don’t fully appreciate photography that concentrates on the latter. Even one day exploring the relatively unassuming landscape of Canaan Valley further solidified why I love landscape and nature photography. Our surroundings are an inseparable part of us as humans, and to recover and present just a piece of the feeling of the landscape to someone else is I gift I continue to cherish.

One thought on “Blackwater Falls State Park in the Winter”