Wow, it’s been nearly two full months since my last post. My apologies to any who frequent my blog looking for updates.

Unfortunately, my other career has taken most of my time – business trips, training classes, and just a lot to do. It certainly is hard to keep up two “professional” lives and often I have found success in one comes with sacrifice of the other. At some point, I might meet a fork in the road where I will have to decide more definitively where my end path will lead.

Regardless of what my “job” is, I have never felt more fulfilled and vivacious as I have felt through this gift of photography. It’s funny how something ubiquitous as a camera can allow one to explore channels within the self that were otherwise unknown. If nothing else, simply the self-searching has been worth all the effort I’ve put into the craft.

Onto today’s post. A frequent subject around this (and many) areas is the weather. Of course, we experience it every day so it’s natural to be a major discussion topic. One discussion that often intrigues me is the argument against the cold, winter weather we see here in the mid-Atlantic.

So many people hate the cold so much! The idea of wearing a coat and hat, a blustery wind, ice/sleet/snow you name it, and they are up in arms. They swear they can move to Southern California today and not have a care in the world.

While I can appreciate the sentiment, and the apparent luxury of not dealing with uncomfortable temperatures, I personally love the winter. Actually, I take that back. I love the SEASONS. What is the point of monotony in anything in life, especially something so impactful as the weather? As a sentient and sentimental person, I like seeing the change that slowly and constantly engulfs our environment as seasons change. Green turns orange, orange turns bare and back again. Weather patterns change – wind and cloud formations. The whole mood of the scene is drastically different from one season to another. I find that lately, a reliable group of people who share my views are meteorologists. No surprise there though: their whole profession is based on the environmental conditions.

What’s not to like about winter? OK, I don’t like being cold either. But I know no better peace than what I feel when I walk outside at night after a fresh snowfall — the silence is nearly sacred. But even other winter weather — icicles, sleet, frozen lakes/ponds/rivers… I could go on.

To the joy of most and the dismay of me, our winters of late have been pretty warm and dull. Granted, I haven’t had the chance to venture much out West during these times – into the areas of NW Maryland and West Virginia. Fortunately, this year I headed up that way, AND we had a few good days of cold to get some photographic opportunities closer to the city. Maybe this compilation will get your juices flowing about the winter? No? Ok, I tried.

The first image is from here at the familiar stomping grounds of Great Falls, Maryland. A few weeks ago, we got some pretty cold weather that stuck around for about 5 days. After about 4 days, I figured the waters were cold enough to start at least some parts of Great Falls to ice over. Given the lack of rainfall at the time, some of the formations on the Maryland side revealed themselves and allowed me to take a closer look.

The clouds fizzled out just about immediately after I arrived at the scene, slightly contrary to what was forecasted. But, I found a really cool set of broken trees crossed upon each other right in front of a significant “step” in the falls. The icicles were really compelling here – and we don’t get freezes often so I had to take the opportunity: 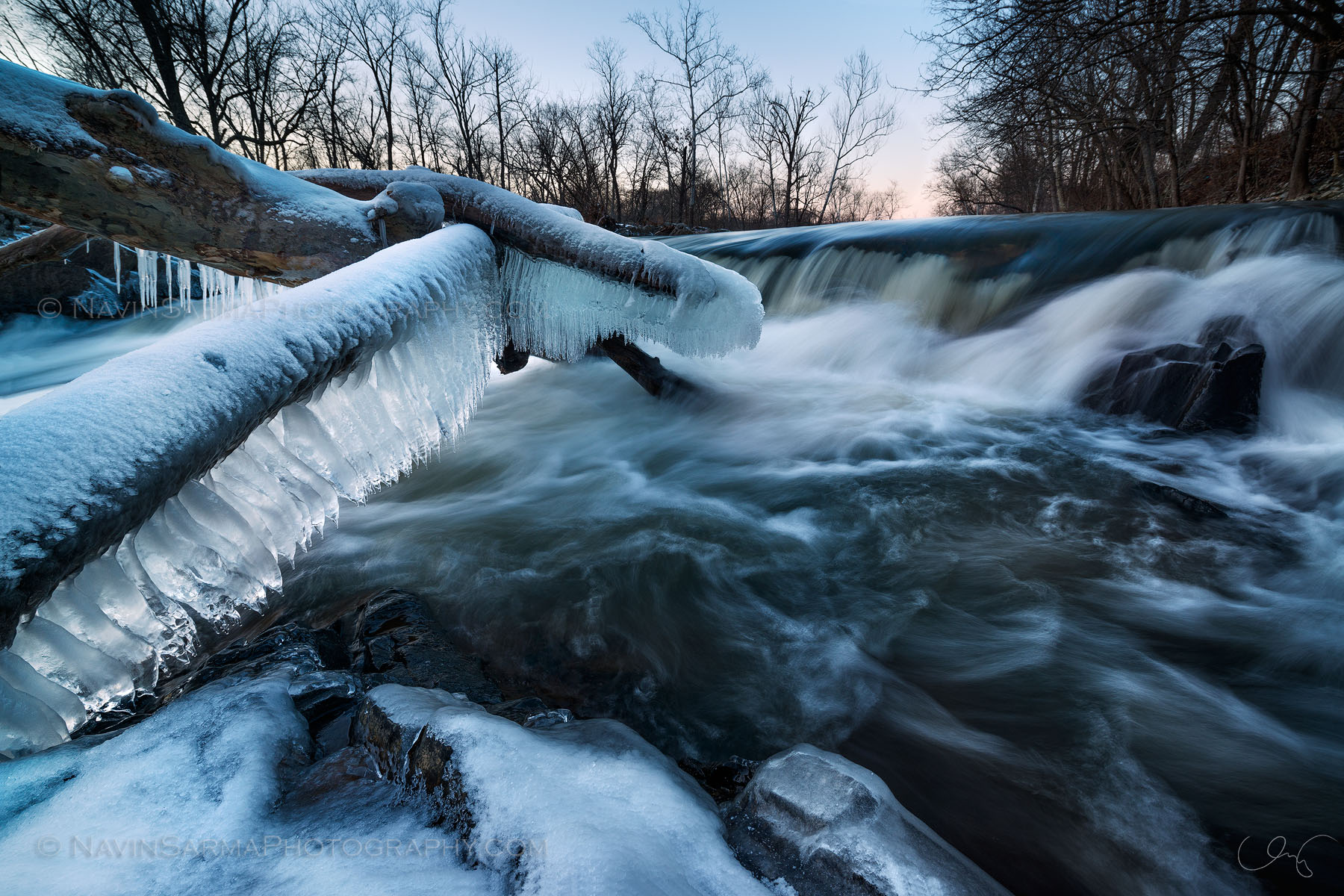 I took a panorama of the same scene for those of you who are interested in larger sizes. This particular image is a mosaic of 20 exposures to achieve both extreme scale and focus: 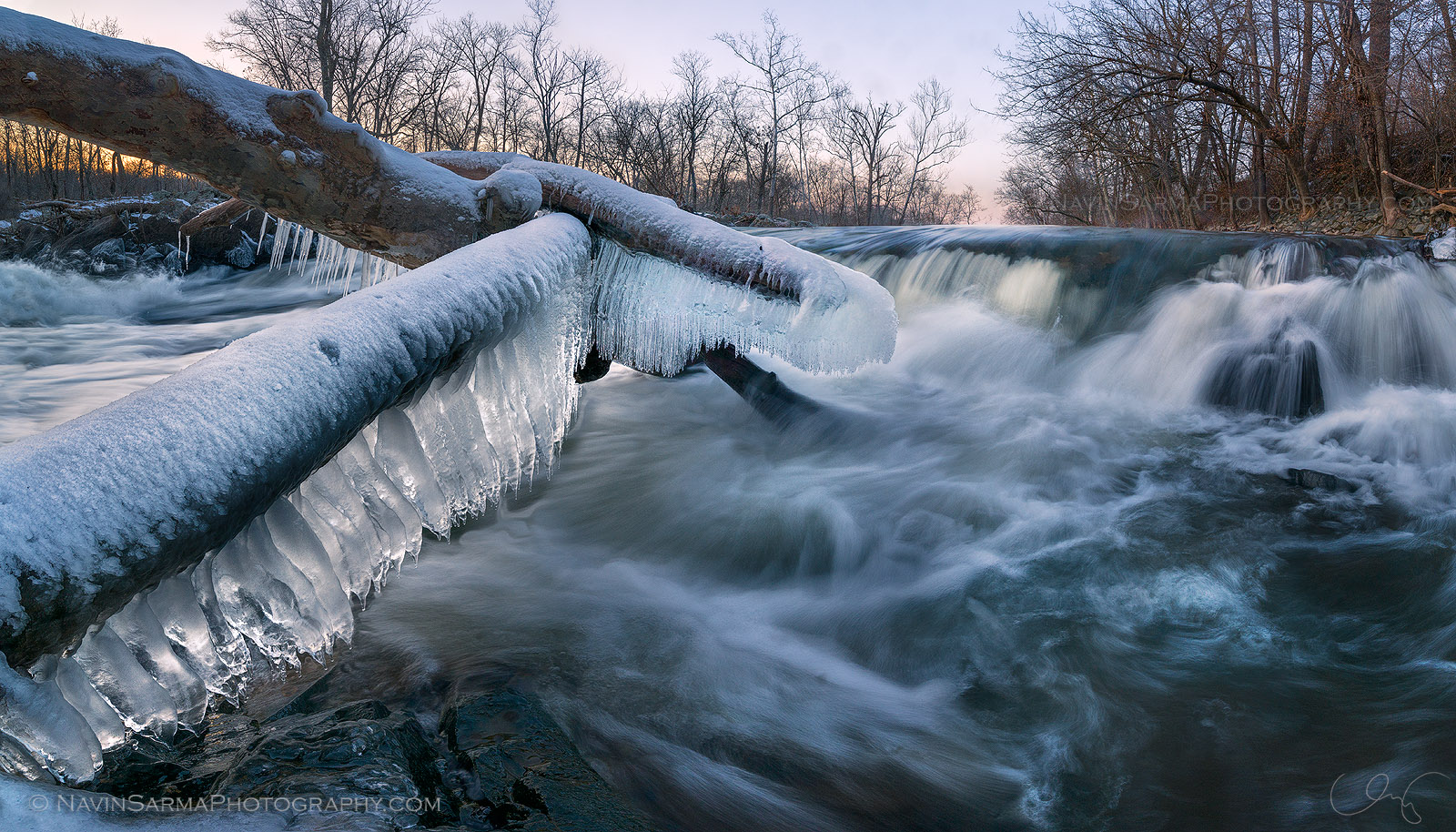 As I mentioned, this year, I had the opportunity to venture up north to the mountains of Western Maryland. This wasn’t a photography trip, but I tried to take advantage nonetheless. The whole weekend we were in the area, we were treated to beautiful winter weather. A constant light snow and very calm winds. A real treat for me given our lackluster winters of late.

Out of one sunset outing, I came away with 4 keepers! That’s an extreme amount for me nowadays. I thought each image was unique enough to warrant inclusion on this post.

This first image is a wide angle of Muddy Creek Falls, the highest waterfall in Maryland at 53 feet. Maryland’s geology is not all that dramatic (especially compared to the relics out in the Western USA), but each natural site, however small, has its history and beauty to be respected. The site was affected by Sandy to the point that the park closed the area from which this was shot. I had to be very prudent not to step on the ice and through to (potentially deep) water.

I just missed some really nice warm light, so I decided to B&W to emphasize the shapes and contrasts: 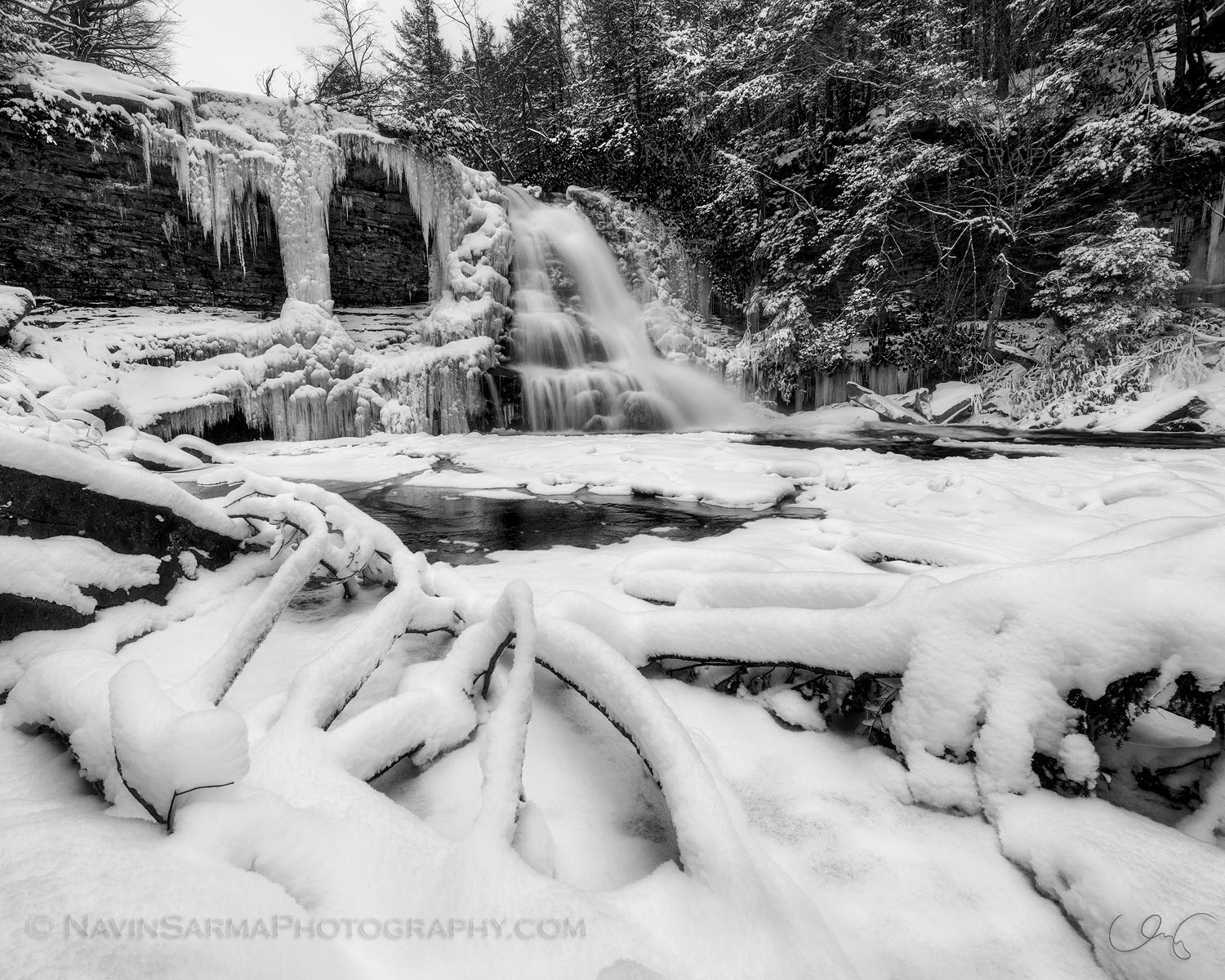 As I continued to observe the scene from a rock not far from the shore, I paid more careful attention to the falls, and the contrasts in shapes and textures between the sandstone rock, dramatically long and sharp icicles, and the rushing water. The way I decided to depict these contrasts was not in one, but two images that I think serve different purposes: 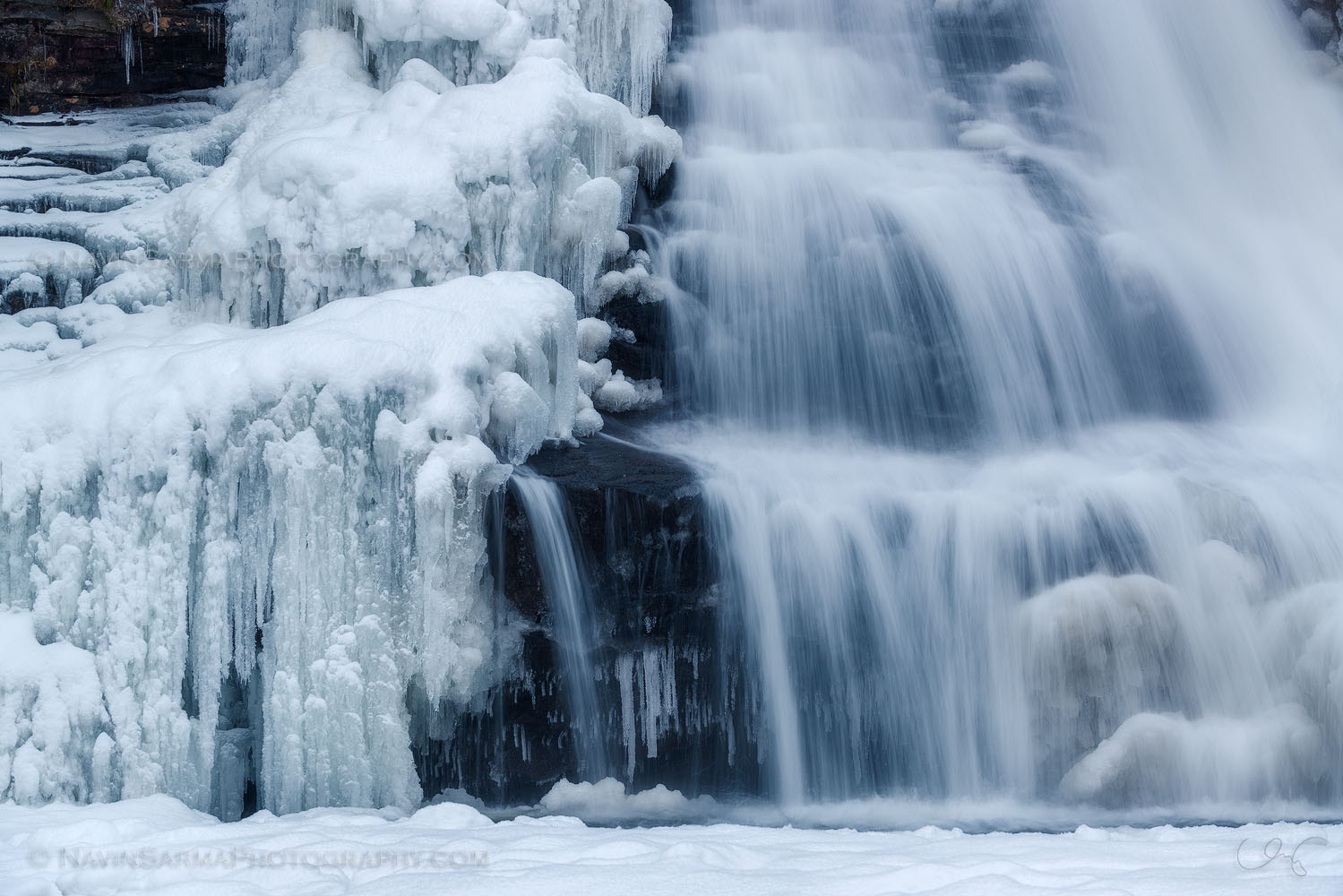 I continued to wait and watch the scene. As you may have noticed from the last image, the light snow began to pick up as I continued shooting, and the white flakes contrasted very well with the darker background that were appearing as the sun sank behind the horizon. I turned my attention to the tree captured in the right hand corner of the first image with its shape and stance standing starkly in front of a shallow cave dripping with long icicles. I played with a few exposures of varying shutter speeds when I decided I wanted to freeze the diagonal motion of the flakes falling down on the scene. The light had dissipated so much that I had to crank the ISO (light sensitivity) on the camera to maximum. It’s times like these where I am thankful to have a low-light champion like the Nikon D800: 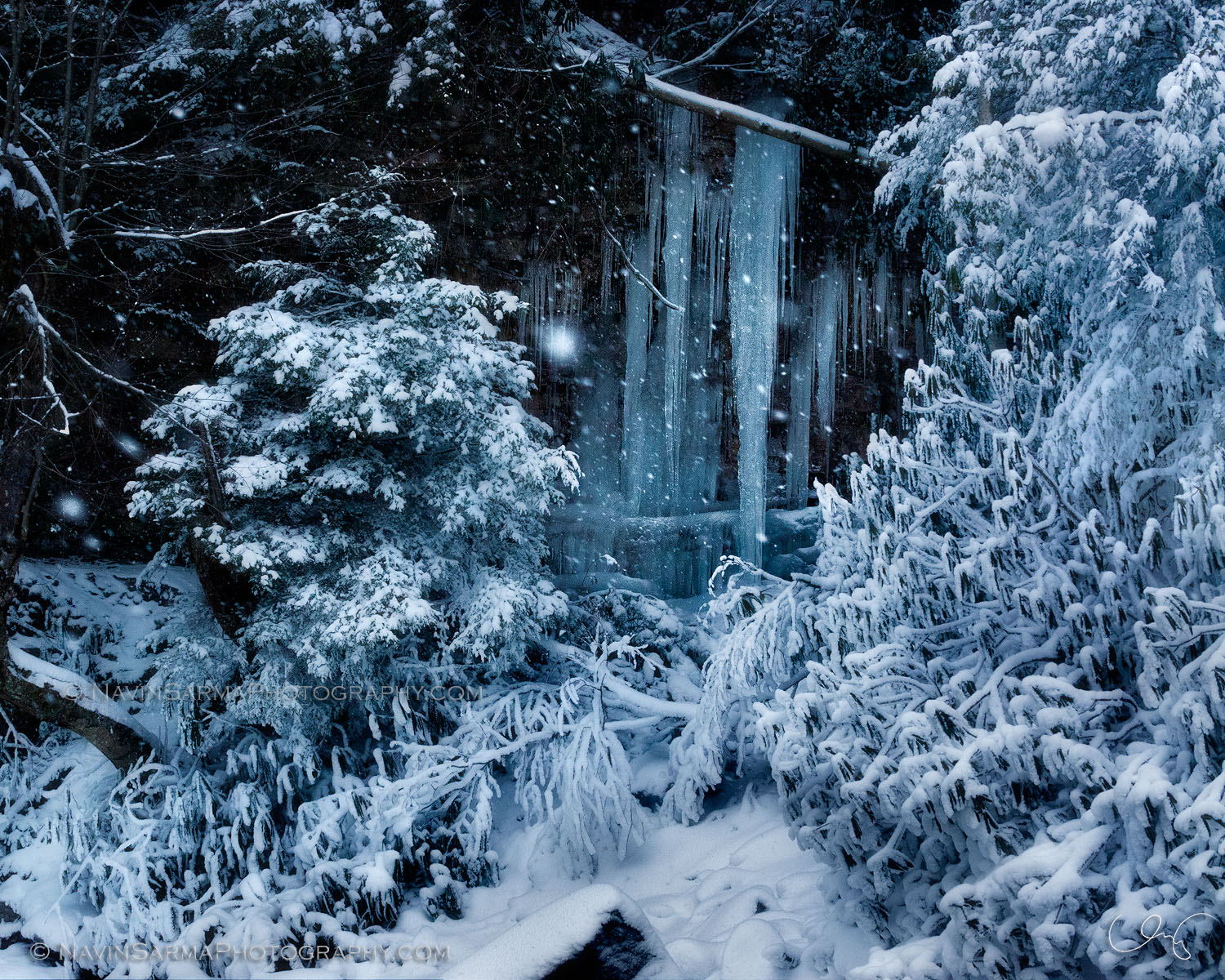 Two months have passed since my last post, but I promise it won’t be two months again until my next one. I hope to capture more of winter before it turns away from us for another year and my thoughts move to the next beautiful transition of our world’s seasons.