Early in November, I set out to the U.S. Capitol to recreate a shot that has been a popular print for me: a panorama of the U.S. Capitol with peak fall foliage under gray, rainy skies. I really love the contrast of grays and fall foliage and can appreciate why this shot has been popular. However, I wanted to improve the shot’s composition and detail (it and was shot with one exposure at 21mp cropped in half (essentially 10 megapixels)). Though this can work for a large print even up to 100 inches or more, I wanted to give myself another go at this shot and see what I could come up with.

As I arrived on location, I realized there was a great opportunity for some colorful skies that night. There were high cirrocumulus clouds just hanging over the eastern horizon. I kept this in mind as I continued planning my shot.

As the sun began to set, the colors of the sky took off. I was able to capture 3 very distinct images of the Capitol as the light changed, and a couple of the Washington Monument that showcased the drama in the sky. In order to capture everything, I had to work very fast to keep up with the light, at times running across the mall to capture a shot of the Monument and back to my tripod for the Capitol. It turned out to be one of the most productive evenings I have had developing imagery for my portfolio.

Light tends to start very warm (red) and turn cool as the sun slips beneath the horizon. I ran towards the Monument and captured these two shots — mostly to share the experience and less so for my portfolio: 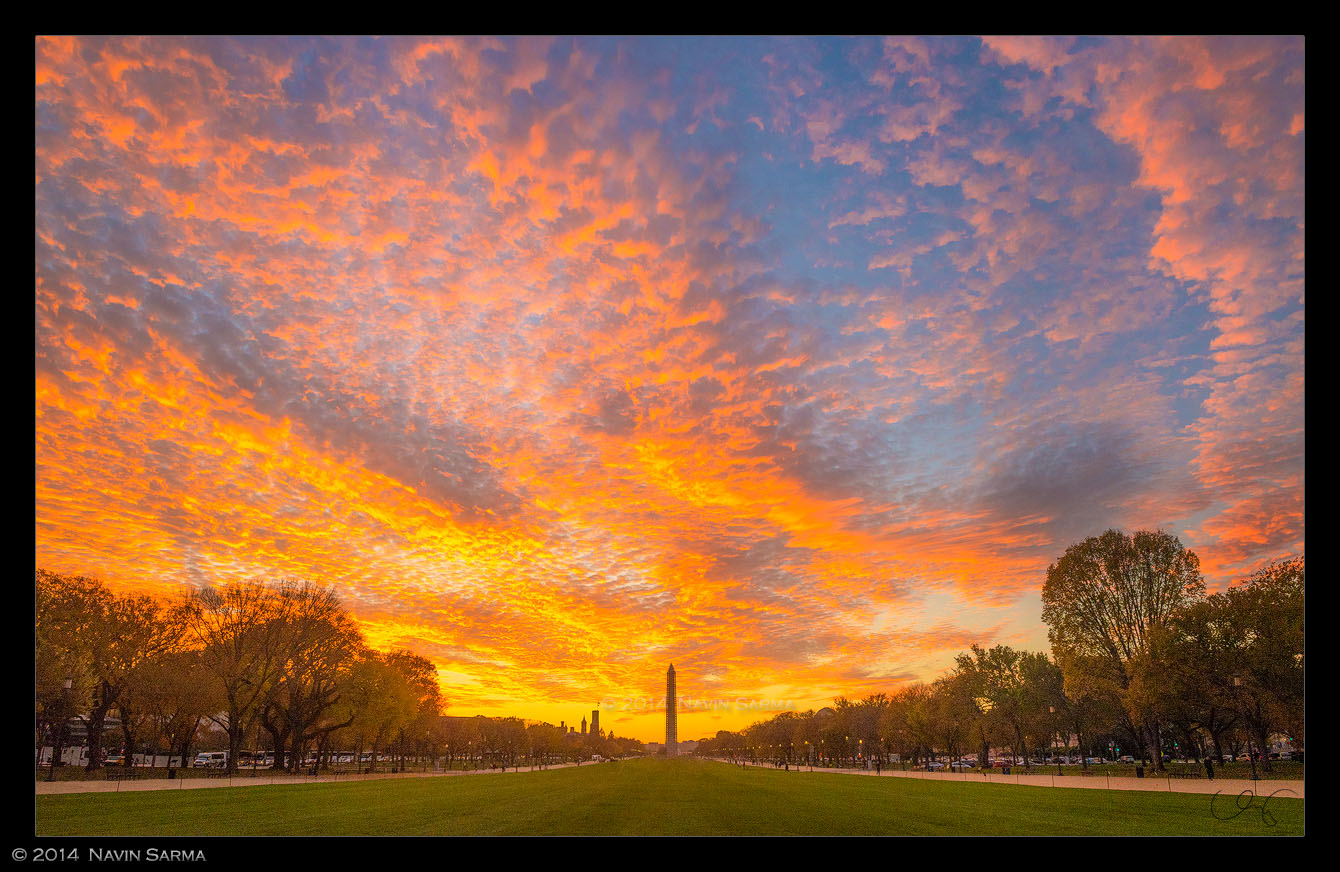 A gorgeous orange consumes the western exposed sky towards the Washington Monument. 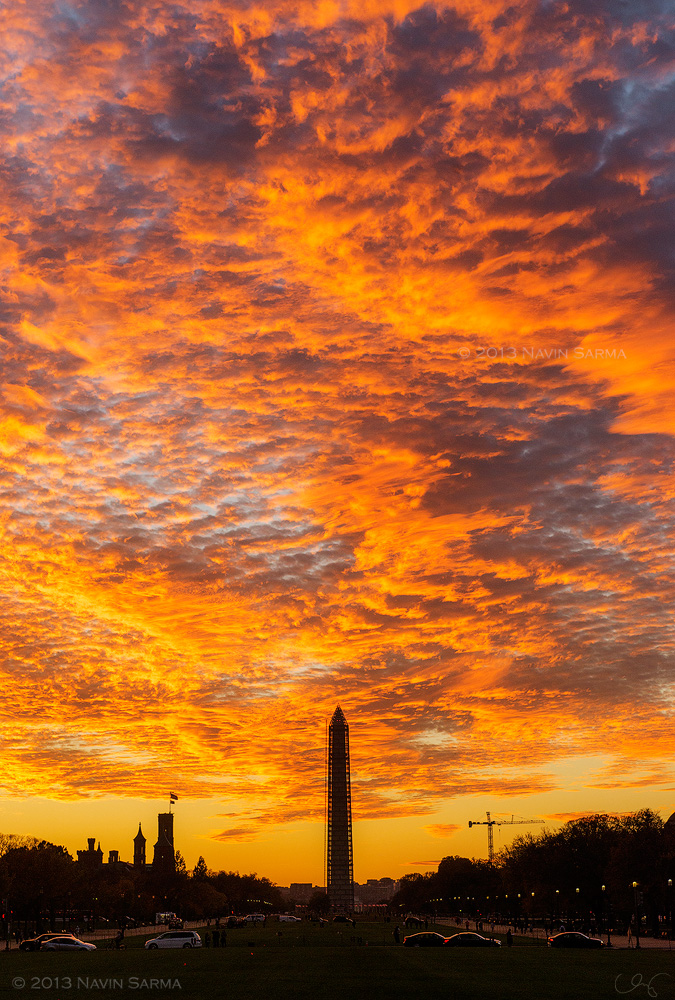 I turned my attention back to the U.S. Capitol, and saw that those orange clouds had drifted over to the eastern sky over the Capitol and started to turn pink, like I had hoped: 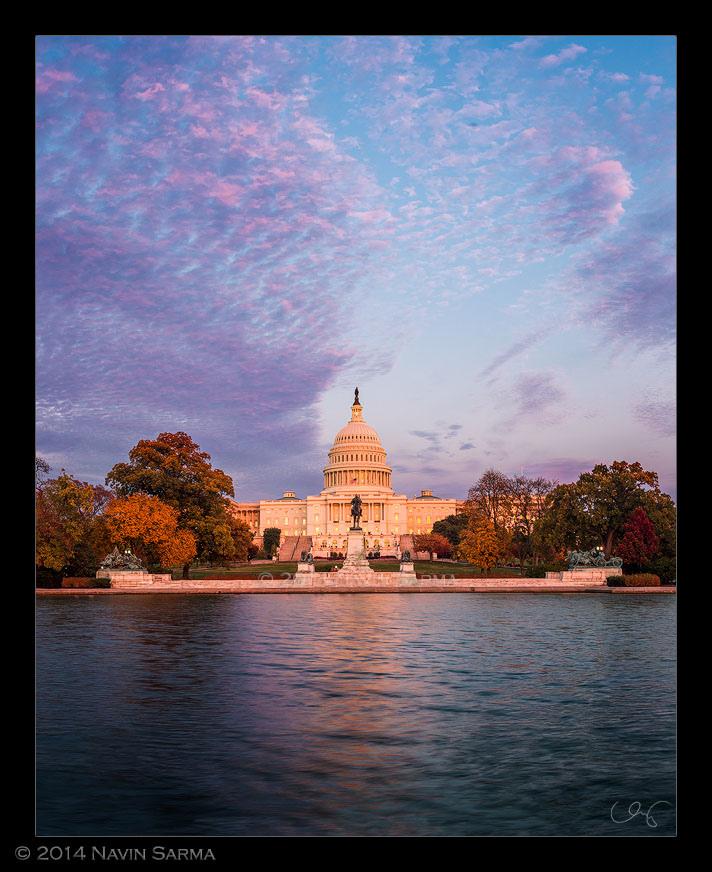 As the pink hues faded, I went for a wider angle and changed the white balance slightly to a more warm tone:

The sun continued to fade and the lights from the U.S. Capitol began to shine. The light became cooler and the contrast of colors between the trees became apparent. This is the image I sought. I captured 5 vertical 36 megapixel shots at 65mm and merged them together into a single panorama. The detail in the large version is great, nearly 20x what I had in my original image: 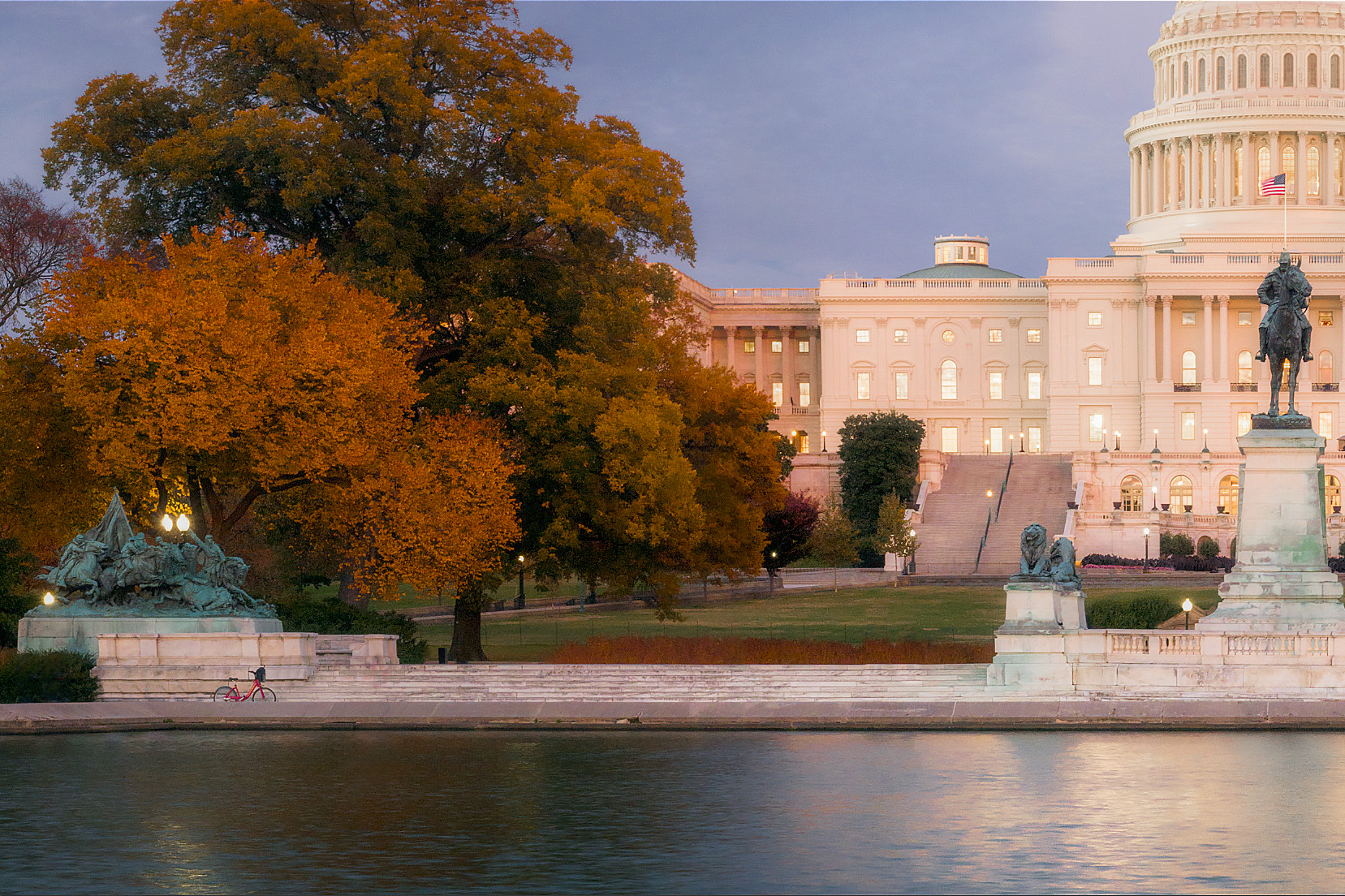 There is really quite an extraordinary amount of detail in this image. Here’s a small crop an about 75% zoom:

The one drawback of this evening was that the weather and sunset were so good, there were a lot of people out on the U.S. Capitol grounds. Why can’t you see them? Well, I decided to take them out of the frame. I have no hesitation when it comes to altering my images to achieve a certain look. In this case, I want this image to be printed at mural size and hung on a wall. It’s not ideal for an image like that to be overrun with distractions. As long as I can maintain reality (in that this scene actually existed), I’m good with cloning. In fact, I think it’s really cool to see the power of cloning and what it can do to an image like this. Here’s the uncloned version of the same 75% crop from above: 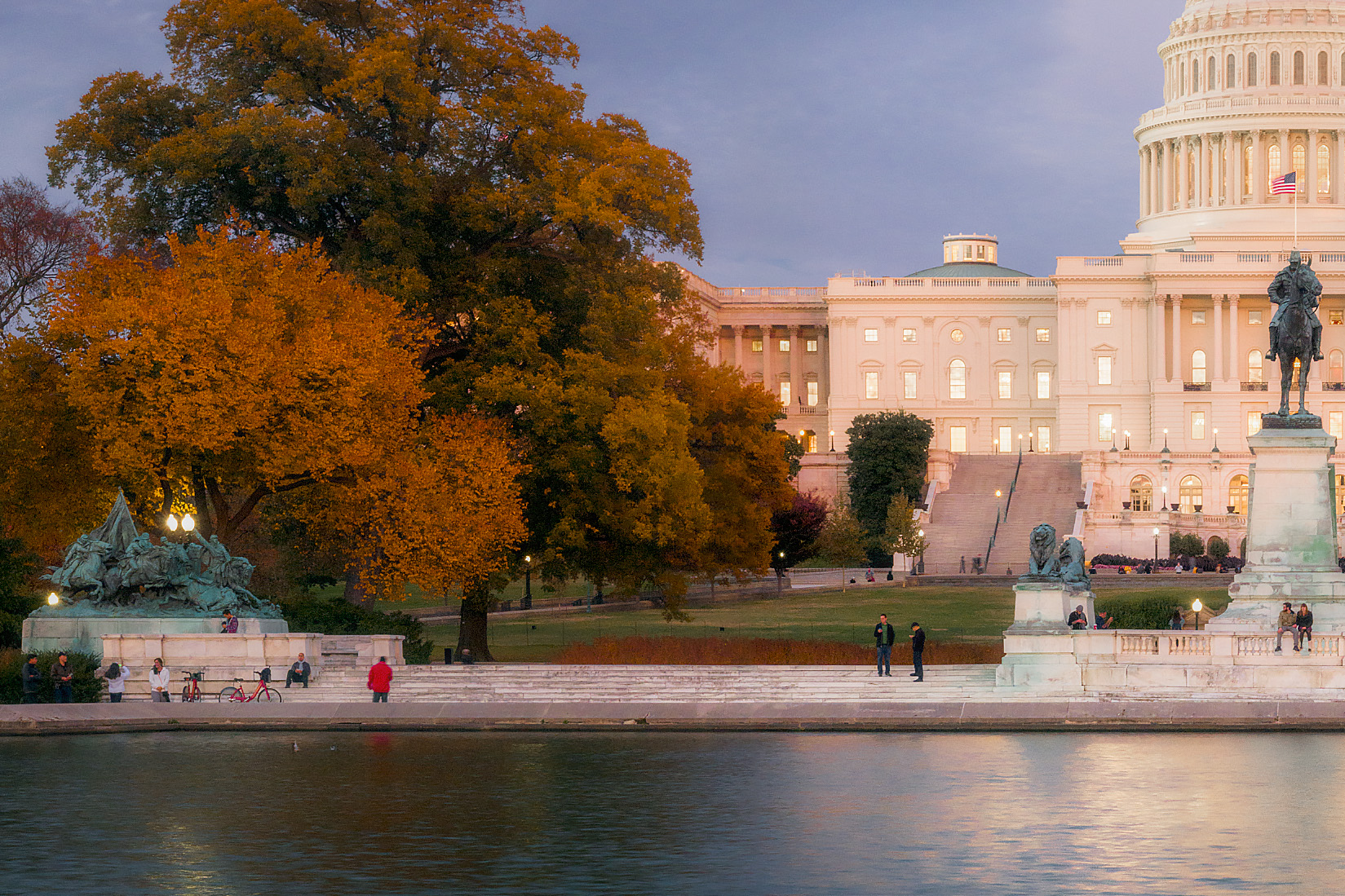 Pretty powerful, if you ask me.

As the night came, I came away with one more image that is probably my favorite. It’s a rather unique look at the U.S. Capitol under the purple clouds that cover the city nearly every night. The purple color is a product of the city lights mixed in with twilight. Shot correctly and with mind to accurate and realistic color, it can create quite a mood: 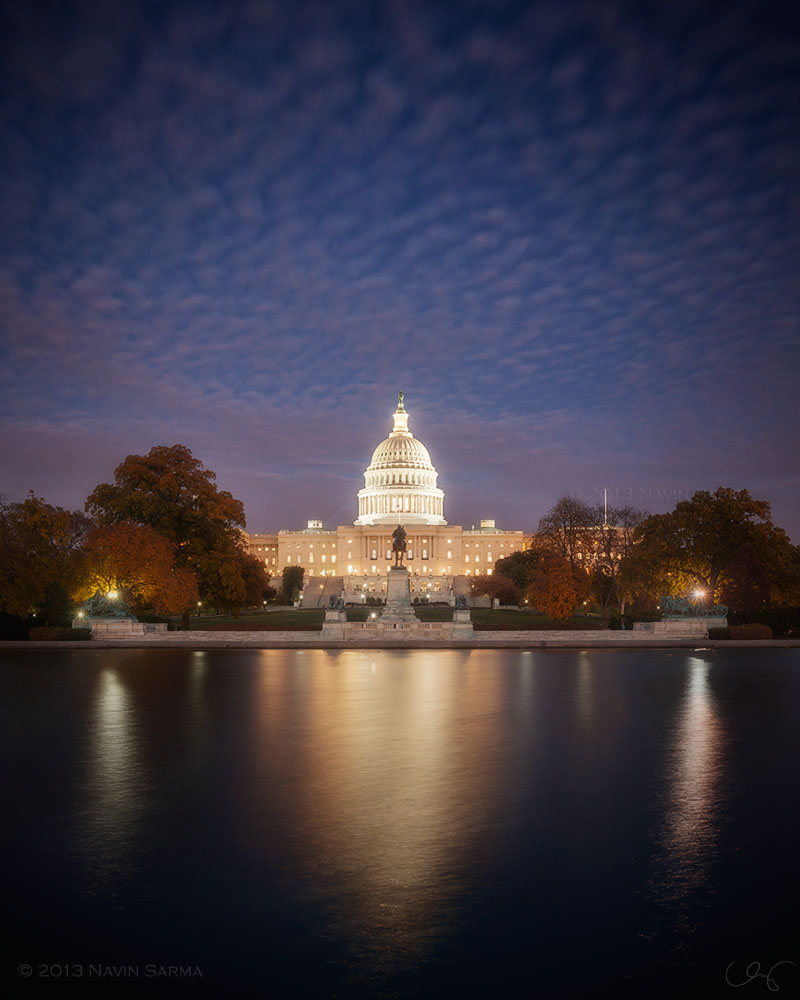 Hope you enjoyed a glimpse of one very productive evening in Washington, D.C.!

2 thoughts on “A Beautiful Fall Night at the U.S. Capitol”